Be a Victim young man - If you want to get ahead

I remember when the whole GFA circus was getting into full swing. You were nobody if you weren't a victim with a story to tell. And, of course, everybody else was supposed to receive this story with sacred reverence. To question a victim was to declare yourself an enemy of all humanity.

And ever since that debacle the victim culture has only become bigger and more lucrative in Ireland. Of course, many people really were victims of one thing or another, and very often real victims were shut up and left on the sidelines. But, the victim industry grew by leaps and bounds. I suppose the victim industry really started with the Jews and their claims regarding WW2. That was worth billions to the state of Israel. How much was it worth to the Jews who really suffered? Well, I saw an interview with an aged survivor in Israel, and he couldn't afford nappies to keep himself clean - while the Israeli government used the billions they were getting from Germany to create more victims in Gaza, the West Bank and Lebanon. Why should the Israeli state get this money and not the actual survivors?

But, we in Ireland have got to the point that if you can't prove that you are a victim group, you can't expect any political hearing. The Travelers have even been provoked into claiming that they are a separate ethnic group - a separate ethnic victim group - in the hope of getting some measure of civil rights. This is madness. The same with homosexual people. They have been herded into claiming that they are a victim group that must receive anything they want.

And Irish Republicanism has also fallen into this mental abjection. Everybody wants to show that they are the real victims - as if we knew that this is not so much a political battle, but a battle for maximum victimhood - with Mother England as the arbitrator of who should be kissed better and given the prize.

Life is a bitch, and then you die. That's true. But this victim culture drains life of any dignity it might aspire to and turns us all into losers.

In short, there is now a huge political motivation to class yourself as some sort of victim, and no motivation whatsoever to stop being a victim - because then you would lose your victim status, and thus the perks and privileges of being classed as a victim. Of course, the more that everyone realizes that they need to be a victim, the more everybody finds some reason to class themselves as victims, and the more the category becomes meaningless. But then, meaninglessness is the principal characteristic of our unfortunate culture. The citizen has gone. Even the shabby consumer is on the way out. Today the victim is all.

You could be a victim because you are not a victim !

Feck off ya bollocks....Just to make you feel included !
P

You should mentions scousers and Hillsborough.

They were partially at fault and somehow everybody else is to blame. 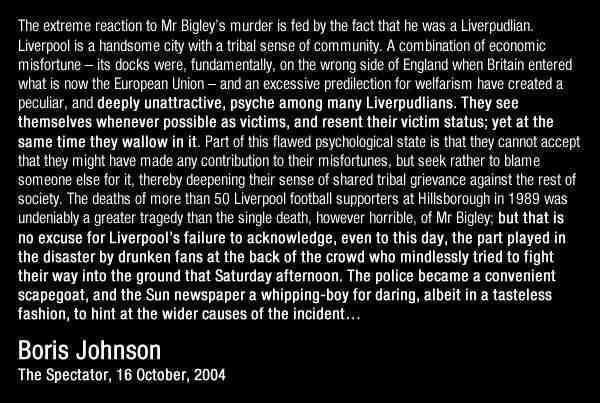 We appreciate the move by the Government today and remind ourselves that it is a bail-out by taxpayers for the banks. Pearse Doherty