Sumner Redstone has had an odd life

He is the majority owner and chairman of the board of the National Amusements theater chain. Through National Amusements, Redstone and his family are majority owners of CBS Corporation and Viacom (itself the parent company of Viacom Media Networks, BET Networks, and the film studio Paramount Pictures). According to Forbes, as of September 2015, he was worth US$5 billion.[1]

Redstone was formerly the executive chairman of both CBS and Viacom. In February 2016, at the age of 92, a week after a court-ordered examination by a geriatric psychiatrist, Redstone resigned both chairmanships, replaced by Leslie Moonves at CBS and Philippe Dauman at Viacom. Redstone then became chairman emeritus.
Click to expand...

Now he wants his money back 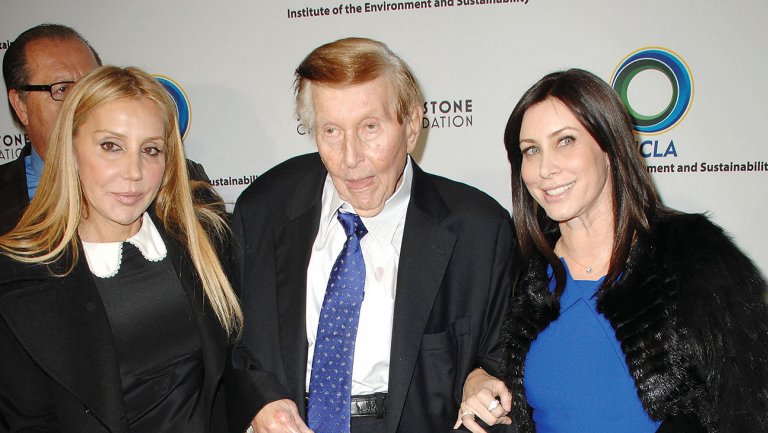 "They manipulated and emotionally abused Redstone to get what they wanted  jewelry, designer clothing, real estate in Beverly Hills, New York, and Paris, and money, lots of it," writes attorney Robert Klieger. "By the time Redstone threw Herzer and Holland out of his home, and out of his life, last fall, they had taken him for more than $150 million and left him in debt on account of the immense tax obligations triggered by those 'gifts.'"...This suit claims the women took advantage of the aging Redstone, using their feminine wiles to "commandeer" his life.
Click to expand...

Does anyone care?
John A. Costello, Fine Gael Taoiseach " the Hitler Brownshirts were victorious in Germany, as assuredly as the FG Blueshirts, will be victorious in the Irish Free State`

It is a horrible coarsening of morals - either they - or his family - or both ...are nasty people

The ****ers just grabbed him by the pussy!

By all accounts ...it is the one on the left - who is full of the stuff ... you can see the old bulgy eyeball problems ... just príck her (again) and it would all come out

cyberianpan said:
It is a horrible coarsening of morals - either they - or his family - or both ...are nasty people

Or the silly old fool was thinking with (or fantasising about) his todger. And to chalk up that much debt one presumes he was enjoying it at the time, so feck him and his regrets.

cyberianpan said:
It is a horrible coarsening of morals - either they - or his family - or both ...are nasty people

I suspect they are all extremely nasty people. In the same way that I suspect that an open jampot on a kitchen table in an average August will attract bees and flies.

Mitsui2 said:
Or the silly old fool was thinking with (or fantasising about) his todger. And to chalk up that much debt one presumes he was enjoying it at the time, so feck him and his regrets.
Click to expand...

cyberianpan said:
Sumner Redstone has had an odd life ...
Click to expand...

I can only thank the Lord my God that by His grace I don't have the money to be so tempted.

I'm reminded of the story about two elderly multi-millionaires.

Murphy has a glamorous 25 year old live-in girlfriend, and his pal ,McAlpine, says to him, "And why do you think she's living with a man of 75?"

Diedre -- The Homes of Donegal

cyberianpan said:
Ah- my only concern really is that his mind seems to have deteriorated a lot - so not sure if he really gave informed consent
Click to expand...

A lifetime ago I spent a while working in a very lowly capacity in the rather upmarket Amstel Hotel in Amsterdam. In my time there there always seemed to be at least one fat, old, ugly businessman (usually English) staying who was accompanied by a young blonde female, notionally a business associate, who was (theoretically) booked into a separate room.

I grew fascinated by the phenomenon, so took to checking the registration details in the wee small hours when we lowly immigrant workers basically owned the hotel. I look back very fondly on my days there. Apart from anything else it was the first time I mixed much with Muslims, as it happened - sharing dope and booze and coffee with them, and finding they were generally pretty much like anyone else. Except they tended to have astonishing dope even by Dutch standards and even by Dutch standards made fabulous bloody coffee.

Sometimes some of these blonde...eh... "business associates," bored out of their minds, would join us in our 2 & 3.a.m. tippling evenings. The English ones were usually smart Londoners from places like Peckham or Willesden or similarly then-unfashionable areas, who'd changed their lives (by their own lights) with a willingness to compromise in one hand and a bottle of blonde hair-dye in the other. Good oldfashioned workingclass Brits, often of Irish origin. Grand ladies, many of them, and some were very, very clever, and I'm confident that by now some of the smarter ones are upperclass middleaged ladies whose accents have completely changed and who live in gorgeous houses in the Home Counties. The fat old needy businessmen, of course, are all long ago dead.

Anyhow the conclusion I drew from the experience - and have never really seen any reason to alter - it that what these guys were actually doing in hooking up with such girls was basically getting all the girls they'd been too boring, ugly or busy-making-money to get when they were that age themselves. It had nothing in particular to do with sex - or, if it did, it was masturbatory, nostalgic sex. Some of the sexual stories the girls used to tell were hideously, grotesquely hilarious - in fact right up your street, cYp!

Your OP - for obvious reasons - brought all this back to mind. My attitude would be, well, if they sucked him dry it was because he went out looking to be sucked dry... though perhaps he should have specified the nature of the suction in some enforceable manner. A silly old git who thought money would buy him love - and he's well old enough to have heard the Beatles warn him about that more than 50 years ago. He should have lived his youth when he had it, and left it alone when it was gone. It's excellent advice, even for the non-rich.
G

I dont know why I didnt listen to you in the first place.

You were giving me good advice.

The Eagle of the Ninth said:
cYp.

I dont know why I didnt listen to you in the first place.

You were giving me good advice.
Click to expand...

cYp ahould use that as a signature, Eagle! It's not often such things are said about him.
J

Trump is looking a bit tired there. Still, better watch those pussies ladies!

Who am I supposed to feel sorry for in this story?

The Donald in a decade.
Life is hard
That's why no-one survives
D

Mitsui2 said:
Or the silly old fool was thinking with (or fantasising about) his todger. And to chalk up that much debt one presumes he was enjoying it at the time, so feck him and his regrets.
Click to expand...