Is Fake News a threat to democracy?

I think it is but mainly in the reaction of our political classes to it.

If you penalise political speech it does not matter if people file into polling booths and vote in privacy - it's a dictatorship if political speech is controlled. Around the world many countries seem to be going that way, we are not surprised when it is the Indonesia or India doing it, it's sad but not surprising but when it is happening in the EU, in Ireland it's a major change and a very frightening one. It's as if there was always only true news given to us in all the elections and this fake news is new, not so. Fake news has always been with us.

It's better if we allow freedom from authorities to disseminate and digest as much information as we wish and then vote as we wish, if some bad news is absorbed by voters that's a price worth paying to protect the much more important freedom of political speech. And what is the next stage (this is already being discussed) if an election result is said to come about under influence of fake news to discredit that election result or even to cancel it.

I fear that like many bad changes democracy and free speech are attacked in installments, in a slow creeping fashion.

If a government is not the appropriate body to deal with misinformation, is there a better option? Lu believes that the best choice is allowing normal people to deal with fake news themselves, rather than letting the government take care of it for them. Fake news laws are disempowering users. The top-down approach disempowers users, and further empowers people who already have power," she says.
Click to expand...

A situation where i am afraid of the 'cure' not the disease, the authoritarianism of the EU, US etc is a cause for concern.
We will never meet God. We will never meet alien life either apart from microbes. Biodiversity is Earth's only true treasure and our only companions in eternity.

Fake news has been about for ever. These days most of it is aimed at Sinn Fein. 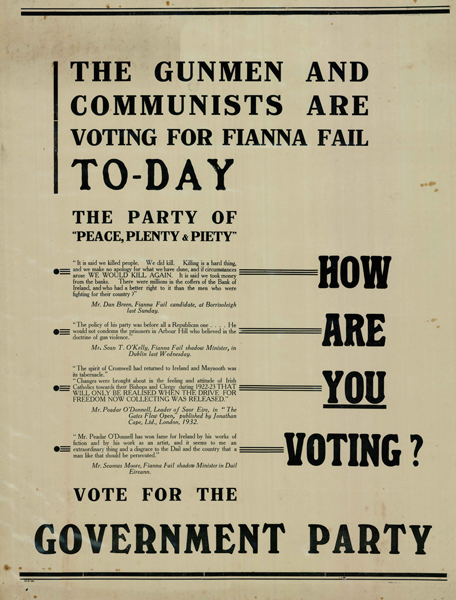 Levellers said:
Fake news has been about for ever. These days most of it is aimed at Sinn Fein.

I can just about make out bits of the smaller text there. The great Peadar O'Donnell seems to have been getting it in the neck from the fascist pr1cks responsible for that steaming pile of shyte.
I was once friendly with a nephew of O'Donnell's. He'd have enjoyed seeing that.
"There is not a single injustice in Northern Ireland today that justifies the taking of a single human life. What is more, the vast majority of the major injustices suffered not only by the Nationalist community but by the whole community are direct consequences of the IRA campaign." John Hume.
S

Fake news was always there.

The problem now is that it has much more powerful institutions involving the internet to spread its message.

The danger Fake News now poses to democracy is not fake news itself, but that governments will use the excuse of the threat it poses to start to restrict freedom of expression. That has already begun in the EU.
"an intelligent, well-informed sparring partner for real debate" - Chris Alexander, Canada's Minister of Citizenship and Immigration from 2013 to 2015.
S

That is a change from the past.
T

Our Pallywood Thread shows the kind of fake news demonizing
Israel that Leftists, 'liberals', Far Right and anti Semitic groups
lap up, and present as fact, to a gullible world......

That is a change from the past.
Click to expand...

Technology amplifies. The bad and the good.
"an intelligent, well-informed sparring partner for real debate" - Chris Alexander, Canada's Minister of Citizenship and Immigration from 2013 to 2015.

Levellers said:
Fake news has been about for ever. These days most of it is aimed at Sinn Fein.
Click to expand...

Yea, fake news is laughable.
I remember those days when the media reported SF and the IRA were somehow connected.

mr_anderson said:
Yea, fake news is laughable.
I remember those days when the media reported SF and the IRA were somehow connected.
Click to expand...

The problem now is that it has much more powerful institutions involving the internet to spread its message.
Click to expand...

The issue is not that Fake News has never existed - what makes it most effective is the dynamic between the reader and the writer.

If one particular group comes to dominate opinion, then the result is almost never favorable. All totalitarian regimes had their state-controlled media apparatus to remind people of how glorious they were.

In the internet age, you have a level of exposure never before seen. Also, this generation has long since forgotten the dangers of fake news that our parents and grandparents would have endured.

The result is predictable enough. The teaching of history - or the lack thereof with regards to the dangers of Communism and Fascism - is resulting in the perfect target audience for malicious actors to diffuse their ideology.

Best evidenced by the "Anti-SF" gang or the "Anti-Trump" gang. Easier to see in the USA - plenty of "anti-Trump" folks who have an awful amount of difficulty properly articulating why Clinton would have been the favorable alternative.

Such polarization of opinion only makes Fake News' simplistic appeal all the easier to indulge in.
Avarus animus nullo satiatur lucro - Latin Proverb

Mods!
Any chance you could merge this with the Trump Gets Caught/Comey/Mueller threads.
Woman; Adult Human Female

Newstalk and RTE have been around for years. Fake news isn't new.
Our day will come.

That is a change from the past.
Click to expand...

Fake news isn't just about spreading false stories, it also encompasses ''failing'' to report on actual ones.
All MSM news outlets have been guilty of that.
And therein lies the problem.
No outlet has the monopoly on screaming 'fake news', when they are undoubtedly guilty of it themselves.
Look at how all the US news channels are trying to tell Trump to go to war in Syria.
Somehow when it comes to war, both CNN and Fox are on the same side.

90% of the media in the US is controlled by just 6 companies.
https://www.zerohedge.com/news/2016...nd-americans-consume-10-hours-programming-day

Now here's the (insidious) flip side.
The internet is chipping away at their influence. And they do not like that.
Consequently, youtube is demonetising many videos, citing them as far-right/far-left/racist etc., even when they are clearly not.
Even when youtube channels have the same guests on as CNN, FOX or MSNBC, they still get demonetised for 'extreme content'.
To give you an example as to what classifies as 'extreme content', if you have Oliver Stone on your broadcast you'll be guaranteed to be demonetised.
That's how ridiculous it has become.
F

Most of the time you cant know that whether or not a news is fake. Humanbeing is prone to be lazzy and in general they avoid thinking deeply and detailed, so they simply choose to believe in what they are told as long as it fits their personal interests. For example 9 people are murdered by truck driver and media told you he was a Muslim, you didnt need to ask what is the proof or evidence, you simply believed it because this is what you want to hear. The largest and most famous media companies works in this way, they tell you a little real and many lies.


The real solution to solve this problem is to be able to sue media companies based on their news and enforcing sanctions if they cant prove what they claim. Here another problem appears, everyday media prepares many news that dont contain any definite judgment, for examle such a title "The poster named mranderson may be murdered his mother". So they dont need to prove anything even if you sue them because they didnt say you did, they said "maybe". Or another example "Serial killers and Muslims has a common point, both of them are addicted to drink water". Are you able to sue such a news title ? Probably no. This is called negative perception managament or in Islamic saying "fitnah".
I am not responsible to win but I am responsible to participate.
R

Fake news has always been around its just a lot more noticeable now because there are so much more alternate choices its frightening to think what many could get away with pre internet no wonder so many want to censor it when they can no longer control the narrative.


Embedded video or alternatively search Internet Truthkit
"There are two ways to conquer and enslave a nation. One is by sword. The other is by debt." - John Adams, second president of the US

The really worrying thing is that fake news creates a breed of cretinous conspiraloons.

It also gives the likes of Trump a handy excuse to shout out to the said credulous every time he's been caught doing stuff he just swore he has never done.
For the cretins who want a world without vaccines - well here's the world without ONE vaccine.
G

I think I am going to die from galloping ironyitis.

OP is one of the biggest purveyors of shlock on this site, someone who is still debating whether the Moon Landings took place in 1969.

The rise again of organised state propaganda such as Russia and Iran are promoting, and of anti Western terrorist agendas, is exceedingly dangerous to the very existence of our Western civilisation.

Read Bin Laden's original fatwahs of 1996 and 1998 as an example. If you strip out the religious language, you find half of this forum saying the exact same thing, after being exposed to these messages for twenty years. Even worse, these same fools seem to believe they are "red pilled" or something, rather than dupes.

It's spreading and has become highly pervasive.
“Oh boy, how many people ended up dying because of the righteous! Left or Right, makes no difference, both know that their way is the only way."
You must log in or register to reply here.
Share:
Facebook Twitter Email