Is the west ready for ISIL's 10th birthday "commemorations" in October 2016?

I was reminded of this issue after watching Clinton and Trump talk about ISIL during their first debate. Trump was as usual getting it wrong - pretending that ISIL came into being in a supposed vacuum during Obama's term of office. Instead the truth is that ISIL came into being during the second term of Bush 2, just before the Iraq War troop surge of 2007. If you recall the time, things weren't going well in 2006 for Bush 2 - he had tried to win the Iraq War on the cheap and it didn't work. That's the real vacuum that caused ISIL to come into being.

While the west concentrates on the ongoing Clinton/Bush circus, and relatively minor attacks by homegrown ISIL supporters, ISIL's 10th birthday is just around the corner. The big day is "October 15, 2006, which is when Abu Ayyub al-Masri declared the formal dissolution of al-Qaeda in Iraq and the establishment of the the Islamic State of Iraq".

I've seen nothing recent in the western media about this upcoming date. Surely the buggers will try to "commemorate" this date in some way.

So is the west sleepwalking its way into something terrible in October?

This article explains the background to the 10th birthday:

The date most important to ISIL is October 15, 2006, which is when Abu Ayyub al-Masri declared the formal dissolution of al-Qaeda in Iraq and the establishment of the the Islamic State of Iraq. Coming just as the Surge and the Awakening in Iraq were emerging, the declaration was widely ignored in the West but it caused a massive debate among jihadis that attests to the importance of that declaration among Muslim extremists.

There is a healthy debate to be had among specialists in the West about whether that initial Islamic State of Iraq was intended to be an actual governing institution (my view, mostly), a hollow propaganda win, or a desperate effort by its leaders to bring about the apocalypse. Regardless, everyone should understand that ISIL started its own clock nearly ten years ago this autumn and that is how it understands its own history today."
satisfied with frugal comfort

Days leading up to and the date itself represent a treasure chest of rich cyber threat intelligence end point traffic. Systems and personnel will be exploiting this date to yield new data.
We're screwed - understand the FACTS here

I sure hope they don't attack any EU buildings in Brussels. That would be awful.
Faoi mhóid bheith saor 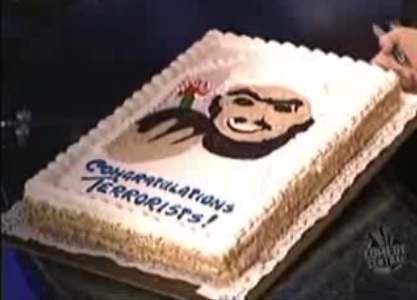 Beachcomber said:
So is the west sleepwalking its way into something terrible in October?
Click to expand...

right now we are helping the USA murder people

what goes around comes around

Will there be cake?

A stripper?
Life is hard
That's why no-one survives

firefly123 said:
Will there be cake?
Click to expand...

ISIL aren't a thing apart. They're not born of the 21st century or the machinations and mistakes of actors who've danced within living memory. They are a product of an idea that has been around for over a thousand years and are just the most recent incarnation of it. Talk of ISIS being this president's or that president's doing is nonsense.

Imagine ripping a hole through time and dragging 15th century Madrid into today. That is, with no small amount of rhetorical flourish/poetic license where the Muslim world finds itself today. As late as the 1980's, swathes of the Muslim world believed the Koranic truths of a flat earth. Now their youth gaze upon twerking Kardashians on their phones and watch soaps of Americans and Europeans living lives of abandon. They've been dragged into the light in a heart beat. What Europe took 400 years to do, the Muslim world is having to do in a few decades. It hurts and the spams of violence are to be expected. Pinning it on this or that president is to be myopic on a grand scale.
"an intelligent, well-informed sparring partner for real debate" - Chris Alexander, Canada's Minister of Citizenship and Immigration from 2013 to 2015.
J