"SOUTH AFRICAN PRESIDENT Jacob Zuma survived a parliamentary vote of no-confidence today, as members of the ruling African National Congress (ANC) stuck by their leader despite divisions and fierce criticism of his rule.
The no-confidence motion needed to secure 201 of the 400 votes in parliament to succeed, but fell short with 177 votes, national assembly Speaker Baleka Mbete announced this afternoon.
Criticism of Zuma from within the ANC has grown amid multiple corruption scandals and mounting economic woes, with the celebrated party of Nelson Mandela declining sharply at the polls.
ANC officials predicted that the president would survive the vote given the partys large parliamentary majority.
Today, the parliamentary party celebrated victory over what it described as an attempted soft coup."

So even a secret ballot held in the National Parliament wasn't enough to dislodge him from power. Will Zuma turn out to be another President for Life? Will the ANC survive the era of Zuma?

After the freedom fighters and idealists have won the good fight, the corrupt carpet-baggers pile in. It's the same everywhere.
Pero camarada, ya han pasado.

Wascurito said:
After the freedom fighters and idealists have won the good fight, the corrupt carpet-baggers pile in. It's the same everywhere.
Click to expand...

True whenever the movement becomes the government - corruption is sure to rear it's ugly head.
R

South Africa is only going to continue to go further and further down the toilet with those loons in charge.

Zuma's huge complex in the background, local living conditions in the foreground. 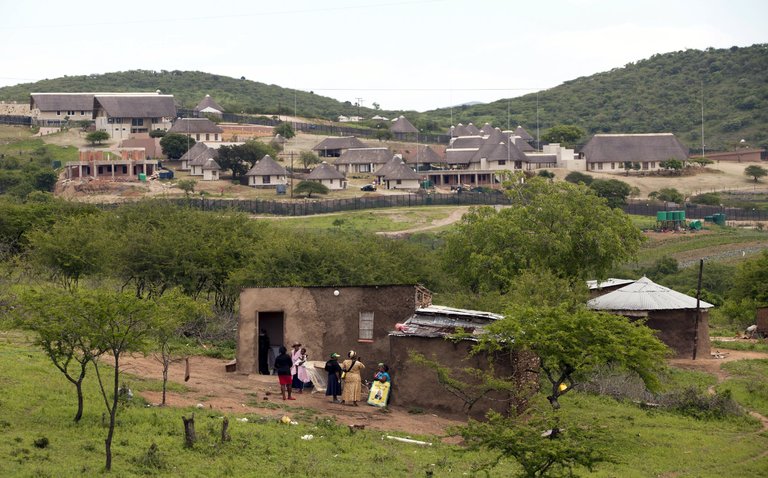 The rand fell by 1% after the announcement of the vote outcome.

Unemployment is at a 14-year high of 27.7% and the economy is back in recession.

"Jacob Zuma has brought our nation to its knees. We call on all members of parliament to do the right thing and remove Jacob Zuma," the main opposition Democratic Alliance (DA) party, which brought the motion to parliament, said in a statement.

Depressing stuff. SA has been going backwards now for at least 15 years, and even under the protection of a secret ballot ANC MP's could not do the right thing. How naïve now those dreams of a progressive multi-racial regional leader seem - even Nigeria has arguably more potential to become a regional superpower.
R

midlander12 said:
Depressing stuff. SA has been going backwards now for at least 15 years, and even under the protection of a secret ballot ANC MP's could not do the right thing. How naïve now those dreams of a progressive multi-racial regional leader seem - even Nigeria has arguably more potential to become a regional superpower.
Click to expand...

Yes another Zimbabwe in a once prosperous nation gone to pot.

midlander12 said:
Depressing stuff. SA has been going backwards now for at least 15 years, and even under the protection of a secret ballot ANC MP's could not do the right thing. How naïve now those dreams of a progressive multi-racial regional leader seem - even Nigeria has arguably more potential to become a regional superpower.
Click to expand...

In fairness, the RSA is nowhere near as corrupt as Nigeria.

But, the problem is that South Africa is heading in the wrong direction.

Next expect Zuma's chums to hassle the Speaker in the Parlaiment.
Coveney's ambition is the be Ireland's next EU Commissar and Ireland will pay a price as he builds his CV to position himself sufficiently loyal to the nEU empire.

"in the latest poll by research company Kantar TNS, only 18% of South Africans living in metros feel that Zuma is doing a good job as president."

razorblade said:
Yes another Zimbabwe in a once prosperous nation gone to pot.
Click to expand...

Zimbabwean President Robert Mugabe is expected in South Africa on Tuesday next week on an official visit, the presidency has said in a statement.

"President Jacob Zuma will on Tuesday, 03 October 2017, host the President of the Republic of Zimbabwe, His Excellency President Robert Mugabe, during his official visit to South Africa to attend the 2nd Session of the South Africa-Zimbabwe Bi-National Commission (BNC) scheduled to take place in Pretoria," read part of the statement.

It's the ANC is FFx100. The voters will deplore what's happening and still loyally vote for their tribal chiefs.

Ardillaun said:
It's the ANC is FFx100. The voters will deplore what's happening and still loyally vote for their tribal chiefs.
Click to expand...

It's also a bit like the Liberal Democratic Party in Japan, the people just can't seem to vote them out for long!

"Zimbabwean President Robert Mugabe has sent his best wishes to the ANC for a successful elective conference which has already been mired by the Eastern Cape provincial conference held this weekend past. "

Will "Gucci Grace" still have Immunity in the new set up and will the ouster of Mugabe embolden opposition to Zuma?
B

Looks like Zumo's ex wife is going to be elected as new ANC leader tomorrow and thus will almost certainly be the next SA leader after Zumo steps down.

She has the support of Zumo and and of the 'corruption' wing of the ANC with vote buying of delegates expected to tip the scales in her favour according to reports in the SA press. Country has become a real basket case.

"South Africa's Jacob Zuma gave his last speech as African National Congress head today, as the only party in power since the end of apartheid prepared to pick its next leader, and likely future president, in a vote that was too close to call.

The election is perhaps the most pivotal moment for the ANC in its 23 years of power. Scandal and corruption allegations have tainted Mr Zuma's presidency and the party that launched black majority rule under Nobel Peace Prize laureate Nelson Mandela is now deeply divided, its image tarnished at home and abroad.

Mr Zuma, who is backing Ms Dlamini-Zuma in the race, can remain head of state until 2019.

A trained lawyer and former union leader, Mr Ramaphosa, 65, has vowed to fight corruption and revitalise an economy that has slowed to a near-standstill under Mr Zuma with 28% unemployment and credit rating downgrades.

That message has played well with foreign investors and Mr Ramaphosa is expected to be backed by ANC veterans, labour unions and civil society organisations.

In contrast, Ms Dlamini-Zuma is seen as a fierce campaigner against racial inequality whose hostility to big business has rattled investors.

"She has not made corruption the only pillar of her campaign, because the most critical issue in South Africa is this huge inequality," said Carl Niehaus, a key member of Ms Dlamini-Zuma's campaign."

So old boss same as the new boss - very disappointing!
B

pumpkinpie said:
Isn't it lovely to see the great work that our Foreign Aid money does folks?
Click to expand...

Did foreign aid actually pay for Zuma's residence? I hope not.

"The rand currency ZAR=D3 had risen to a nine-month high of 12.5200 earlier, in as the market priced in a Ramaphosa victory. Government bonds also closed firmer before announcement that Ramaphosa had won the race."