Yet another of these Ali Snackbar attacks has taken place - in Michigan this time. The perp travelled from Canada to the US and carried out his knife attack in "a non-secured, public area" of the airport in Flint, Michigan.

Given that there have been such attacks before on "non-secured, public" areas of airports, isn't it time for the authorities to secure such areas? With the normal current setup these unsecured areas provide target-rich environments for jihadists to attack.

Authorities are treating the stabbing of a police officer at an airport in Michigan as an act of terrorism.

The suspect, Amor Ftouhi, 50, shouted "Allahu Akbar" ("God is greatest" in Arabic) before knifing the officer in the back and neck, said officials.

Lieutenant Jeff Neville is in a stable condition in hospital after Wednesday morning's attack at Bishop International Airport in Flint.

Lt Neville helped take the suspect, a Canadian, into custody at the scene."
Conform or be cast out

Nothing to do with Islam. Move on.

A Voice said:
Nothing to do with Islam. Move on.
Click to expand...

Islam is the religion of peace nothing to see here lets all move on.

Marginalised Canadians, who have experiences waycism.

A Voice said:
Marginalised Canadians, who have experiences waycism.
Click to expand...

Crossed the border to the US to vent their margainalised grievances......

He shouted out the Ali Snackbar thing.
Conform or be cast out

gijoe said:
Crossed the border to the US to vent their margainalised grievances......
Click to expand...

He may have trouble getting back out of the US though.

I wonder if the usual luvvies will be demanding that he gets to serve his jail term back in Canada? That's the sort of thing that they do - feel all sorry for these perps and take up their "cause".
Conform or be cast out
R

He shouted out the Ali Snackbar thing.
Click to expand...

I think that poster may have been sarcastic can you not tell.

This is retaliation for the Fizbury mosque attack. Islamophobia is the problem as the Flint survivors, Michael moore included can testify 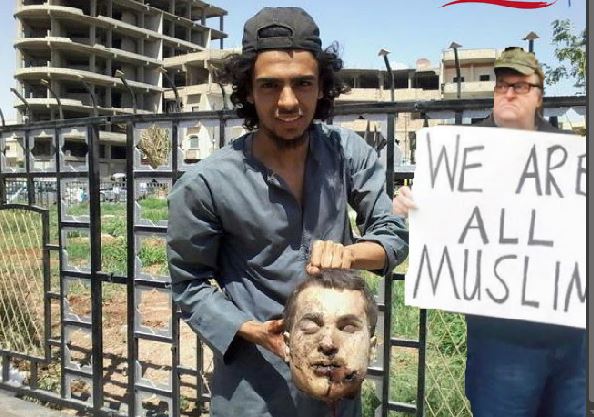 This is part and parcel of living in a large city

razorblade said:
I think that poster may have been sarcastic can you not tell.
Click to expand...

No, I couldn't.
Conform or be cast out

when will this madness end ?
R

LISTOWEL MAN said:
when will this madness end ?
Click to expand...

When islam ends which is most likely never.

Ftouhi appeared in court Wednesday for an initial appearance wearing a face mask. It happened after Ftouhi spat on a U.S. Marshal, M Live reported.

Ftouhis public defender told the U.S. Magistrate Judge Stephanie Dawkins Davis that his client primarily speaks Arabic and French and may be difficult to understand. Ftouhi added that his speech may be unclear due to the face mask. Davis and Marshal conferenced and allowed Ftouhi to remove it. His attorney, David Kelzer, told him none of what you were doing before, okay?

I find it interesting that like several of the recent jihadists this guy is older and has children.

This profile would seem to run counter to the normal assumption that modern jihadists are impressionable young people who have been radicalised by older people.

Perhaps it's all more random than that now, and ISIL is now appealing to older people who are willing to leave their children behind. ISIL of course won't care about that - that children are going to grow up without a father in their day to day lives.

"A Montreal resident accused of stabbing a police officer at Bishop International Airport in Flint, Mich., on Wednesday is being described by acquaintances as a "good person" and a quiet family man.

U.S. authorities named Amor Ftouhi, who is approximately 50 years old, as the suspect in Wednesday's attack, which the FBI is investigating as an act of terror.

On Wednesday afternoon, police descended on the apartment on Bélair Street in Montreal's St-Michel neighbourhood that Ftouhi shared with his wife and three children.

Three people were questioned, and RCMP were expected to take over at the scene to begin a search and seizure operation.

Ftouhi had been working as a driver through a job placement agency.

His Facebook page says he is originally from Tunis, Tunisia. It's not clear when he moved to Montreal.

Gelios said Ftouhi stabbed the officer in the neck with a 30-centimetre knife after yelling "Allahu akbar," which is Arabic for "God is great."

"He made a statement something to the effect of, 'You have killed people in Syria, Iraq and Afghanistan and we are all going to die,'" Gelios said."
Conform or be cast out

Is it?
Conform or be cast out

Ftouhi’s public defender told the U.S. Magistrate Judge Stephanie Dawkins Davis that his client primarily speaks Arabic and French and may be difficult to understand. Ftouhi added that his speech may be unclear due to the face mask. Davis and Marshal conferenced and allowed Ftouhi to remove it. His attorney, David Kelzer, told him “none of what you were doing before, okay?”

Let's see how he does when he's serving 20 years in a US prison.