Article on Liam Lynch and his attempts to avert civil war in Ireland (second part of a series).

The Chains of Trust: Liam Lynch and the Slide into Civil War, 1922 (Part II)

Four days after the anti-Treaty IRA seized the Four Courts in Dublin, Lynch wrote to his brother, exulting at how he was "absolutely certain that the Free State was sent to its doom by our action last week. While Lynch had his regrets, he was determined not to let them deter him from doing what he must do: Sad it is to risk having to clash with our old comrades but we cannot count the cost.

Still, Lynch hoped having to pay a cost at all. As he told his brother, he had the means to end the Free State by force if he so wished, but we dont mind giving it a slow death, especially when it means the avoidance of loss of life & general civil war.

For now, negotiations represented the best means to achieve the bloodless victory Lynch craved. The first step was a truce he signed with his Free State opponents on the 4th May, both sides pledging to abstain from violence. Next were a series of talks that slowly but surely made progress to the point that, by June, the Cork Examiner reported how:

A scheme for the unification of the IRA forces has been agreed upon certain definite linesCertain friendly incidents which have recently taken place in Dublin and elsewhere give ground for high hopes of efficiency and camaraderie among the army.
Click to expand...

Not so harmonious, however, were the relationships within the IRA Executive, increasingly riven as it was by feuds and cliques. "The Executive never fused into an effective unit. It never had a common mind or a common policy," complained one member. "Things were done and ordered to be done without knowledge of all the members, sometimes without Liam [Lynch]s knowledge."

Such tensions came to a head at the IRA Convention of the 18th June, when Lynch's resolutions for a reunited IRA, headed by a GHQ that consisted of both pro and anti-Treaty officers, clashed with a very different proposal by Tom Barry.

By the end of the night, the IRA had been sundered even further, Lynch and his allies found themselves locked out of the Four Courts, and his dreams for peaceful settlement were dead in the water. 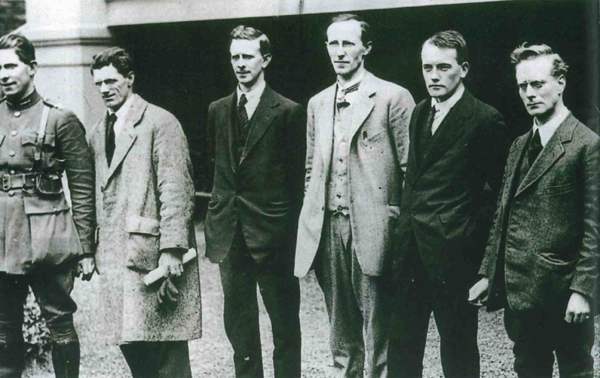 First part of the series, detailing Lynch's resistance to the Treaty since its signing to the formation of the IRA Executive: The Limits of Might: Liam Lynch and the End/Start of Conflict, 1921-2 (Part I)
You must log in or register to reply here.
Share:
Facebook Twitter Email