I am aware of course that there is a thread for predictions but feel that this particular prediction sits more comfortably in Foreign Affairs than it would in Current Affairs. I also feel it is on a subject which will slowly encroach on the European and North American political consciousness over the next few years rather than in terms of weeks or months.

Back in the autumn of 2013 Chinese Paramount Leader Xi Jinping first began to speak openly of the emerging OBOR One Belt One Road) project being backed by a serious wedge of Chinese state funding. With some $40billion worth of initial capital the Chinese leadership including Chinese Premier Li Keqiang began to outline a twin pronged extention of soft Chinese economic power along two ancient trade routes- the old Silk Road and the Maritime Silk Road.

Essentially the Chinese signalled that they are to fund a number of specialist development banks reminiscent to my mind of the European Bank for Reconstruction and Development's activities in the old soviet satellite states following the fall of the Berlin Wall.

A number of huge development projects are envisaged in conjunction with states which would have been on the old overland Silk Road trading route between China and Europe- these would include states in Central Asia, West Asia, the Middle East, and southern and eastern Europe.

The Maritime Silk Road encompasses an even more interesting geography through a complementary initiative aimed at investing and fostering collaboration in Southeast Asia, Oceania, and North Africa, through several contiguous bodies of water – the South China Sea, the South Pacific Ocean, and the wider Indian Ocean area.

The latter trade route is envisaged to ultimately connect the Chinese east coast with trade development as far as the Suez canal.

Work has already begun on joint development and standardisation of the over land rail route down the China-Pakistan corridor and across India.

'The Leading Group for Advancing the Development of One Belt One Road was formed sometime in late 2014, and its leadership line-up publicized on February 1, 2015. This steering committee reports directly into the State Council of the People's Republic of China and is composed of several political heavyweights, evidence of the importance of the program to the government. Vice-Premier Zhang Gaoli, who is also a member of the 7-man Politburo Standing Committee, was named leader of the group, with Wang Huning, Wang Yang, Yang Jing, and Yang Jiechi being named deputy leaders.[17]
In March 2014, Chinese Premier Li Keqiang called for accelerating the "One Belt One Road" initiative along with the Bangladesh-China-India-Myanmar Economic Corridor and the China-Pakistan Economic Corridor in his government work report presented to the annual meeting of the country's legislature.'

The One Road, One Belt initiative is reportedly seen in Washington and European capitals as a Chinese response to the somewhat ill-fated TTIPS and TPP trade deals which have run into a certain amount of political sand in Europe and elsewhere.

With the Chinese state leadership tying itself very closely to the success of the OBOR soft power initiative over land and sea and into Europe will the Americans and nervous European leaders be forced into dealing with a myriad of new and complex problems arising from increased Chinese influence along the land and sea corridors OBOR proposes right into what Europe would pretty much regard as its back-yard?

A map to help explain the two trade routes along which the Chinese government proposes fleing its financial and trade muscle in a way which had been regarded thus far in the era of globalisation as the preserve of the western superpowers.

My own views? It will be interesting to watch the emerging influence of China in what is arguably its most significant initiative on the global stage in modern history.

I suspect that the extension of Chinese soft power via its now vast financial reserves along these corridors will concern the United States and Europe as a logical extension of China's political power in the world. We should remember also that here in this project is contained the germ of future global trade flashpoints and opportunities for flare ups of gunboat diplomacy.
It was all foretold in the foretelling. Unsurprisingly.

China is doing it the right way.
It looks at the USA & Russia and sees two superpowers hemmoraging money through endless, insane wars, with little lasting effect.

It would be ironic if the USA saw China's actions as a threat given its own founding fathers advocated the exact same foreign policy strategy.
L

Another map which may serve to bring home the intended reach of development funding for various state partners along the two OBOR routes- land and sea. 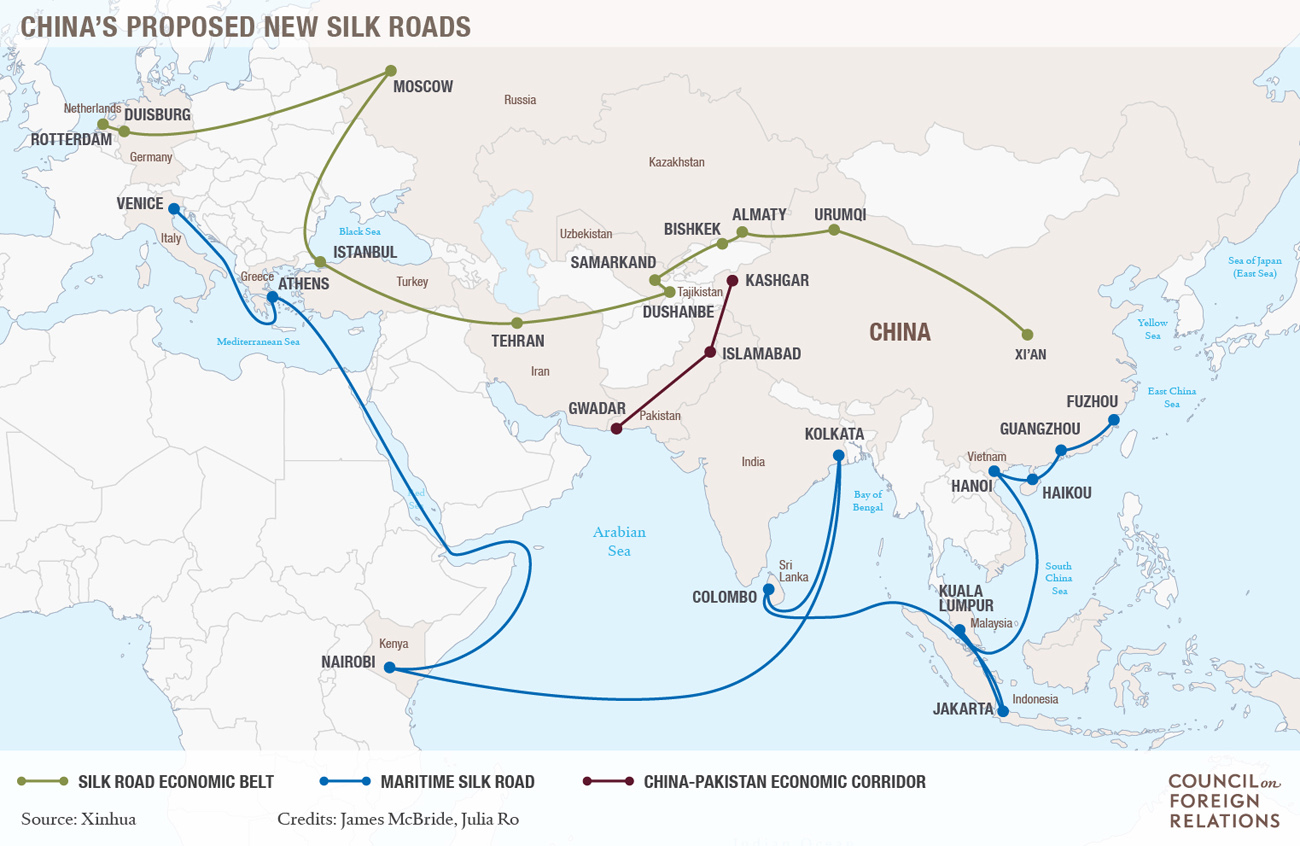 It was all foretold in the foretelling. Unsurprisingly.
L

In one sense of course it is welcome news as the implications of the OBOR initiative means China will double the scale of its overseas investment by 2020.
It was all foretold in the foretelling. Unsurprisingly.

The Bosphorus is an incedible bottleneck. Large sections of the route have seasonal issues. I think the idea makes sense on paper. But maritime will be more important.

Prediction : Trump will slap tarifs on selected Chinese manufactures. For Walmart ( HRC was a former diector ) & Amazon ( owner of the WaPo ) this will cut profits. But it will transfer jobs to locations like Vietnam and Indonesia. And Chinese manufactures will flood into Europe. Now this will present political difficulties. The losers in this arrangement will be castigated by those who are smugly selling the other way. This has already happened in the US.
Coveney's ambition is the be Ireland's next EU Commissar and Ireland will pay a price as he builds his CV to position himself sufficiently loyal to the nEU empire.
O

Will this be a replacement for what's referred to as Chinese neo-imperialism in Africa? Or will it run in parallel with it?

Oscurito said:
Will this be a replacement for what's referred to as Chinese neo-imperialism in Africa? Or will it run in parallel with it?

China and the New Resource Imperialism in Africa - Chicago Monitor
Click to expand...

I suspect the Chinese soft-power gained in Africa ('Our bulldozers our project') will have informed the reasoning behind the much larger OBOR project, yes.
It was all foretold in the foretelling. Unsurprisingly.
O

Lumpy Talbot said:
I suspect the Chinese soft-power gained in Africa ('Our bulldozers our project') will have informed the reasoning behind the much larger OBOR project, yes.
Click to expand...

The Chinese would want to tread carefully. Sinophobia is already widespread in Africa and their unfamiliarity with (or disregard for) language and political norms in countries that are well-established democracies is earning them few friends. Also, they very often bring in their own workers so the locals benefit only very little from the "investment".

I see they are expecting the Pacific to rise 2 meters in Sri Lanka over the next 100 years. It appears the pragmatic Chinese think global warming is a real thing.
Just because you were born in a stable doesn't mean you're creator of the universe
L

True. But then there is one ancient rule in trade that has never changed. 'He who pays the piper calls the tune'.

Looks to me like the Chinese have sincerely caught on to both the soft political and economic advantages of globalisation.

True to form a number of western corporates are eagerly applying tongue to official Chinese arse in the hunt for crumbs from the table. Standard Chartered, some large western law firms and other financial institutions are falling over themselves to welcome the world's new Silk overlords.

The thing about corporations of course is that they are not interested in whether the globalising power is western or eastern. They just want to be where the money is.
It was all foretold in the foretelling. Unsurprisingly.


[video=youtube;7DqvweTYTI0]https://www.youtube.com/watch?v=7DqvweTYTI0[/video]
Just because you were born in a stable doesn't mean you're creator of the universe

Oh noo, the Chinese. They are going to buy and sell stuff. What bastards.
Faoi mhóid bheith saor

It is America's greatest nightmare.

The US is finished we are now entering the Chinese Century.
Just because you were born in a stable doesn't mean you're creator of the universe
G

Perhaps interesting to this discussion: I was observing a rather high profile court case as a member of the audience a short while ago in the Netherlands. One of the litigants was a Chinese company, and the Chinese embassy had sent a member of their staff as an interested party (this was made known to all) to observe the proceedings as well.

I found that quite interesting as it seemed to me the Chinese government sought to apply some subtle pressure. Did not find it a good thing to be perfectly honest. Don't think other countries do this. We might be seeing more of that in the future.

Socratus O' Pericles said:
The US is finished we are now entering the Chinese Century.
Click to expand...

Other than the fact that China is experiencing massive capital flight, a brain drain, a working age population has started to decline and coming demographic disaster, unprecedented levels of overall debt, and they are running out of water, it is totally the Chinese century.
Faoi mhóid bheith saor
L

stopdoingstuff said:
Other than the fact that China is experiencing massive capital flight, a brain drain, a working age population has started to decline and coming demographic disaster, unprecedented levels of overall debt, and they are running out of water, it is totally the Chinese century.
Click to expand...

In view of all these difficulties they still appear quite able to engage in underpinning multiple infrastructure projects in neighbouring states and states along the old Silk Road.

You have to admire their pluck in the face of such adversity, no?
It was all foretold in the foretelling. Unsurprisingly.
L

Politically if Trump is advocating a withdrawal or more insular view of the Monroe doctrine for the US then doesn't that rather leave the road clear for the rise in Chinese interests across the globe east to west?

Russia and China seem to be in agreement that the OBOR policy is a desirable one. Sino-Russian detente appears to be an important plank of the OBOR plan.

China’s Road to Closer Ties With Russia | The Diplomat
It was all foretold in the foretelling. Unsurprisingly.
L

I bet the first families of Tadjikistan, Khazakhstan and on into Polandistan and Italistan etc are all rubbing their hands at this pipeline of backhanders being arranged across their territories.

I might revive the thread where I suggested doing a deal with China and Russia for a naval and airbase at the Shannon estuary leading on to the Atlantic.

See which Fianna Failer starts jumping up and down with his eyes aglow and the word 'jobs! jobs!' on his lips. That Sino-Russian base on the Shannon might not look quite so daft a proposition at all in the next five to ten years as it would anchor the far end of the Maritime Silk Road very well with military cover.
Last edited: Dec 24, 2016
It was all foretold in the foretelling. Unsurprisingly.

Chinese foreign policy is the epitome of the 'free' market, in western democracies.

Your great grandchildren will be Asian.
Fianna Fail - The Anti Democratic Party & The Anti Constitutional Party. Traitors of Irishmen and Irishwomen.
You must log in or register to reply here.
Share:
Facebook Twitter Email