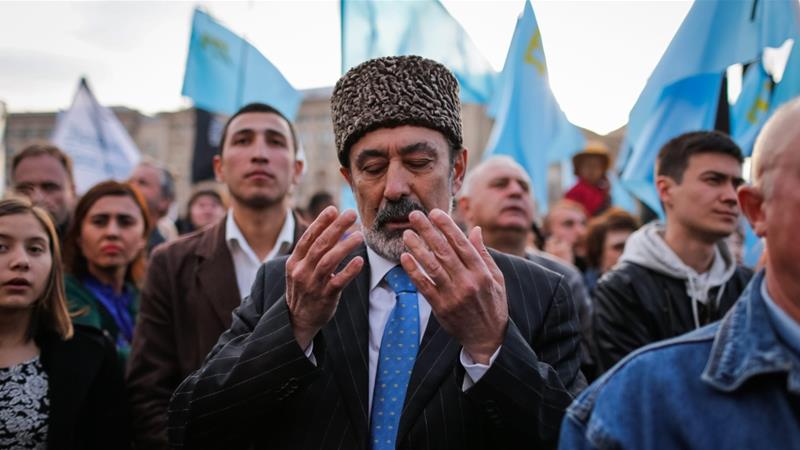 On the March 27th and 28th 2019 Russian enforcement units provided special operation in several regions of annexed Crimea, and 23 Crimean Tatars have been arrested because of their alleged participation in “Hizb-ut-Tahrir” (prohibited in Russia). All arrested persons were moved to the prisons of Rostov region, Russia.

Soon after the operation done by FSB and National Guard of Russia the international community expressed reasonable doubt about the legal justification of such actions.

All 23 arrested Crimean Tatars are accused of conspiracy to provide terror attacks and of participation in terror organization. Neither weapons, nor ammunition or details for production of explosives were found during the unexpected and rough search action (enforcement officers used force against journalists and supporters of arrested Crimean Tatars). The religious literature was only found and it was the only reason to lay charges of planning terror attacks. The fact that attorneys had no access to the houses of their clients in all 23 (!) cases means that the evidences were planted – due to the witnesses the found religious literature was new, just printed.

According to the attorney Ayder Azamatov, all arrested men declared their innocence, all they completely denied their participation in “Hizb-ut-Tahrir”. All 23 arrested Crimean Tatars are active members of civil movement “Crimean solidarity” (they took part in court hearings, supported political prisoners and their families). All they are Muslims and most of them are fathers of large families. Their present life can be described with one word “fatality”. Due to the volunteer and coordinator of “Crimean children” movement of Server Cholakchik, 55 kids and their mothers left with no money to live. Russian juridical system has never been liberal, but leaving under-age children without their dads, accused of terrorism because of the religious books is just the new level of FSB, Investigation Committee of Russia and the courts of annexed peninsula.

It is worth mentioning that not all of arrested Tatars become Russian citizens – many of them have Ukrainian citizenship and demand the meeting with Ukrainian diplomats. Their demands were rejected by Russian prosecutors and it is violation of their rights (according to the rule 38 of the United Nations Standard Minimum Rules for the Treatment of Prisoners, adopted in Geneva in 1955 – all prisoners-foreigners have right to contact their diplomats).

However, not only the diplomats, even the families of arrested Crimean Tatars (their wives, parents and even 55 children) have no information about their current status. By the way, the ban for prisoners to contact other people and especially members of their families violates the 37th and 39th rule of the Standard Rules mentioned above.

It is the tool of Kremlin to force Crimean Tatars move from Crimea, to destroy the “Crimean solidarity”, which informs the world about the repressions in Crimea. At the same time, Russia declares that it stands against terrorism, showing only the books – planted evidences of terrorism. Such public searches and arrests of civilians by the enforcement officers, equipped with bulletproof wests and firearms, have only aim to frighten citizens and to prevent any opposition to the occupants.

European Union has already directed protest note to Russian government because of brutal violation of Crimean Tatars’ human rights and appealed for cancellation of the actions, undertaken by Russia in annexed Crimea.

The long and notorious experience of partnership with Russia shows that only the international review and the prospect of new sanctions can let illegally arrested Crimean Tatars become free and see their families.
You must log in or register to reply here.
Share:
Facebook Twitter Email