Hunter-Gatherer said:
if i order a Salmon panini and an almond croissant in my local coffee shop....i must pronounce the silent L or be stared at blankly
Click to expand...

A Voice said:
You should, of course, be ordering a salmon panino.
Click to expand...

Oscurito said:
I'm going to be a total pedant here and point out that panini is plural.

If you're only ordering one, it should be a panino.

EDIT:
I see that A Voice has already made this point.
Click to expand... 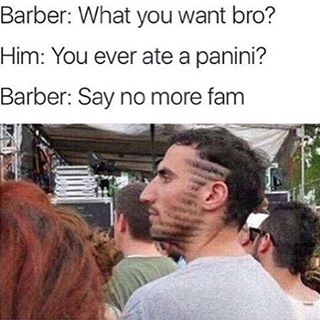 Some of us may watch TV, but as James Ward recently remarked in a review of Blake

that does rather overcall what most of us are up to. I see it and/or hear it, consuming it passively. By and large, I must confess I'm not very vigilant in monitoring the message.

dammit_im_mad said:
That's mostly down to linguistic brainwashing by you feckin' yanks with your incessant torrent of cultural imperialism spewing nightly from our TV sets.

[highlight]So is the fact that most of our kids now raise the pitch at the end of every sentence as if everything were a question.[/highlight]

Both behaviours should be considered as linguistic heresy and result in immediate deportation to the US. Oh wait, no need, most of the offenders already self deport to the US due to our government's economic and social policies.
Click to expand...

It annoys the sh*t out of me too, particularly when I observe it in women; who in my experience are the primary culprits.

The advertising industry is rife with it.
connection to localhost:9312 failed (errno=111, msg=Connection refused)

After the endless uptalk of North America, I find Irish speech south of Ulster and north of Cork rather flat.

But when I hear a Kerry builder saying he's going to get a problem sorted rather than sorted out I know we are all bound for some horrible Americanized Beckhamland.

Oscurito said:
I wouldn't begrudge Bob Dylan his Nobel Prize but I do hold him to a large degree responsible for one of the most common grammatical errors in English today. In his song "Lay, lady, lay", he never specifies precisely what the woman in question is supposed to "lay across" his "big brass bed".

Of course, Dylan was under the common American misapprehension that the verb "to lay" means the same as "to lie" (as in lie down). It doesn't: it means "to put something down". Lay is a transitive verb; it requires a direct object. Like bring, buy and give, you have to say what you're putting down. However, the more you hear som ething, the more it sounds right so - thanks to Mr Zimmerman - I hear more and more Irish people saying things like, "I'm going to lay down for a while" when they mean, "I'm going to lie down for a while".
Click to expand...

The song clearly describes a hungry farmer talking to a chicken.
O

Ardillaun said:
The song clearly describes a hungry farmer talking to a chicken.
Click to expand...