Thankfully Elaine ain't my Doc, thank you very much.
Click to expand...

In 1908, in London, at the Olympics, Irish American Martin Sheridan announced “This flag dips for no earthly king," when the US team paraded past the royal box.

dammit_im_mad said:
There aren't any. And they get free healthcare and education too. what a communist shítehole!
Click to expand...

"Although health care and education are free, and utility rates are extremely low, a survey conducted in Havana at the start of the decade found that a family of four would require seven times the average salary to meet all of their basic needs."

On top of that come the scarcity of products. Variety is low and even staple products are often hard to get. Some provinces haven't seen potatoes in years. Expensive imports in cities like Havana (the best place) compensate the elite and foreigners for that but are far beyond the means of the average Cuban.

To make ends meet 63% of Cubans depend on remittances from relatives abroad.

Those are part of the lucky ones. Those with jobs in the state tourist sector, with bed and breakfast (casa particular), restaurants (paladares) and other jobs that provide foreign currency live a lot better. But even they find some purchases hard. In the last two months no refrigerators were on sale in Santiago de Cuba. The only option was the buy a Mexican made (local value delivered $265) for $1300 and that is beyond nearly all in Cuba. 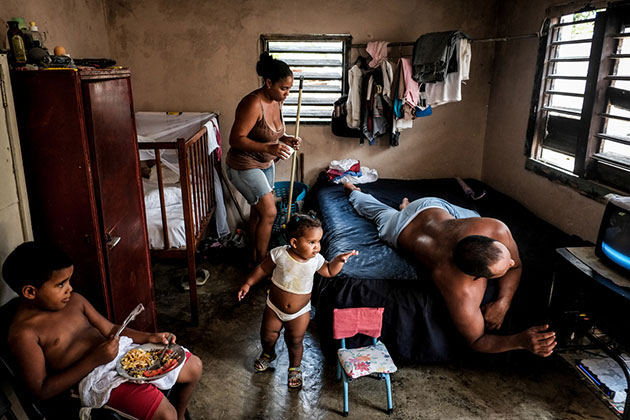 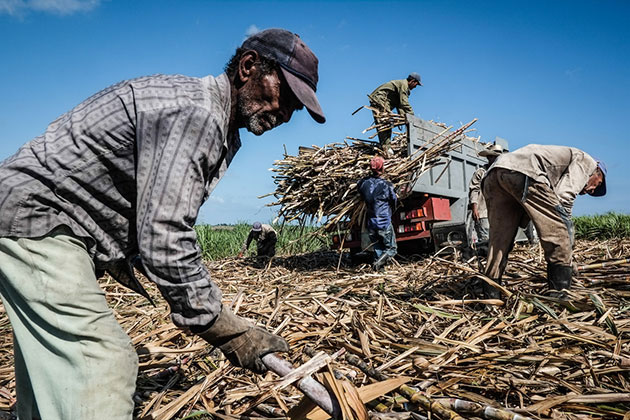 Farmworkers pick up harvested sugarcane on a private farm in Caimito. The group, who work almost every day, only gets paid when the cane sells, so sometimes they can go weeks of work without being paid.

The fellow in the first picture is a cane worker as well. The caption to the photo of him and his family says something about him and his mates being the first in the line of production but the last to get paid.

And this is coming from Mother Jones.

Now for your photos: 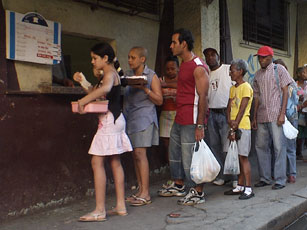 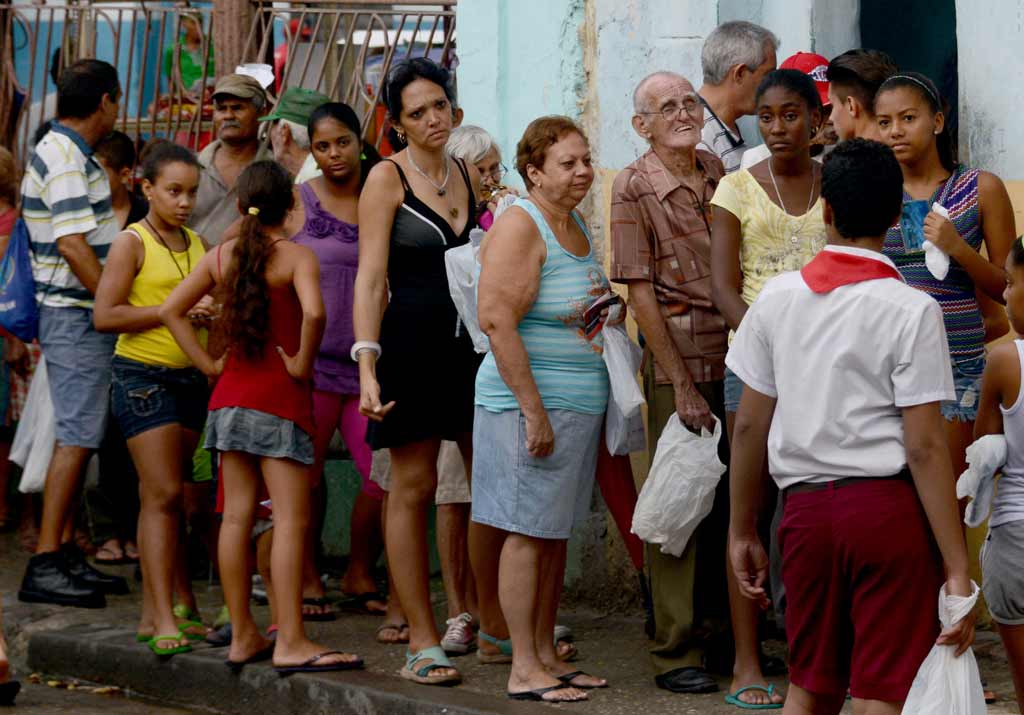 Note the background as well. So absolute poverty. You might look at the background in the photo from the US. And learn some Spanish, as the lines are called "colas". And here's your paradise, ya stupid fool:

HAVANA — As one of Havana’s largest state-run retail hubs, the Supermercado 3ra y 70 is the communist government equivalent of a Target or Wal-Mart, created as a one-stop shopping center. It was designed, quite possibly, by sadists.

Customers with long shopping lists face no fewer than seven places to stand in line. One for butter. Another for cooking oil. A third for toothpaste. And so on.

“¿El último?” (“Are you the last person in line?” ) a man asked, arriving at the end of a slow-moving queue for cheese. This reporter nodded.

Long lines — at the bank, the bus stop or the bodega where government rations are distributed — are a fact of daily Cuban life, as inescapable as the heat or the music.


And here's another food line, this time in oil rich Venezuela:

The difference is in the proportion/scale of the thing, and related to that, the general state of the place itself. Cuba is a third world feces whole. Please visit, so you can see this before it gets replaced, eventually, by a capitalist strip mall:

In other words, please, change the channel from CNN (Comrade Network News), since if I may borrow from a piece on TruthRevolt.org:

On Tuesday, CNN ran what should have been a puff piece in its travel section about the wonders of visiting Cuba. The title of the piece spelled out the angle: "Why you should travel to Cuba before it looks like everywhere else." The authors, James Williams and Daisy Carrington, write, "Cuba is not like other places, or rather, not like anywhere that exists today. To some outsiders, it looks firmly stuck in the 1950s. Vintage cars roam the streets, the landscape is absent of strip malls and global chains, and the buildings -- though crumbling -- hark back to a grander time." The authors conclude, "It is these throwbacks that lend Havana, the country's capital, an undeniable charm. A charm that, some worry, is in peril once the U.S. embargo lifts."

Who are these unnamed sources who worry deeply about the charm of poverty degrading into the soulless maw of capitalist enterprise? The left speaks of poverty with the same fervent attachment with which a lover speaks of his partner's quirks. Poverty is charming. Poverty ennobles. Poverty is Mimi from "La Boheme," Fantine from "Les Miserables," Che Guevara (the icon, not the mass murderer) and Gandhi (the icon, not the shamanistic wife beater). Poverty is artists struggling for their bread while crafting masterpieces.

And poverty is equality. Everyone calls each other comrade while they hoe their gardens for scraps of food. There's a real sense of community when everyone shares a general sense of hopelessness.

Most of all, poverty is wonderful -- for other people. It's a great place to visit, but not a place you'd like to live.

But you need others to live there so you can visit.

The companion piece to that is found here:

Visit Cuba - it's the perfect holiday destination for poverty fetishists | Coffee House
Don't confuse me with facts; my mind is already made up.
You must log in or register to reply here.
Share:
Facebook Twitter Email