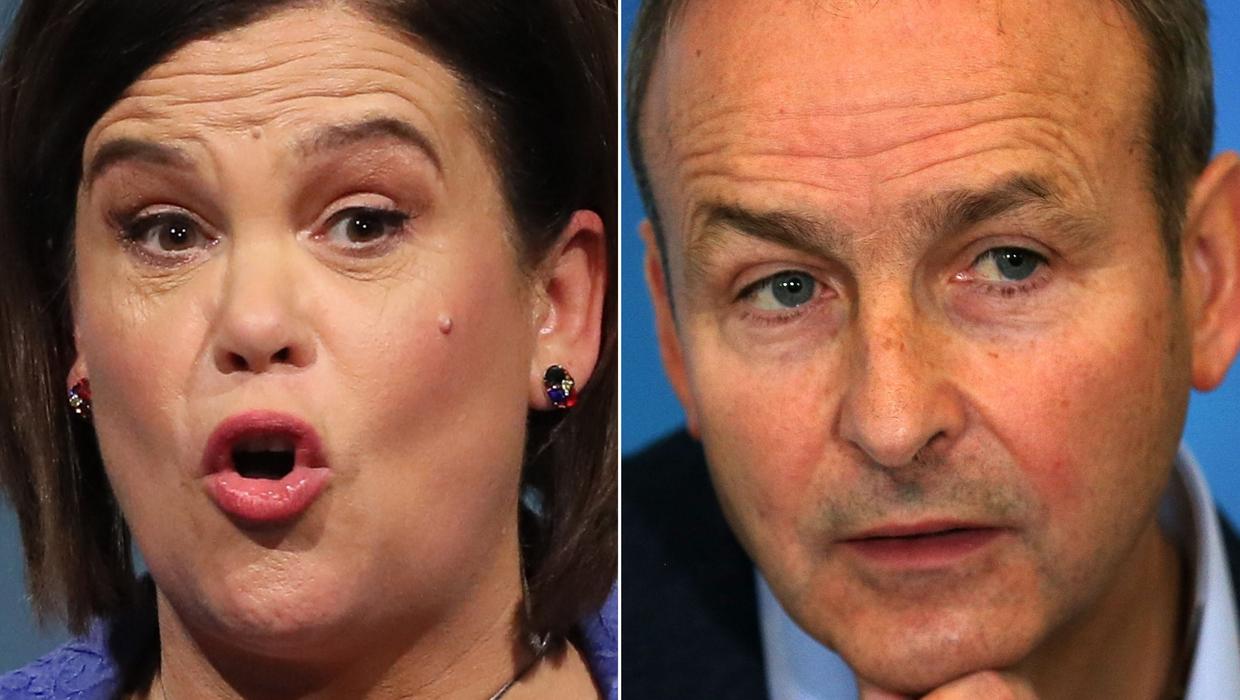 SO, signs are that one out of every four voters may choose a Sinn Féin candidate in the general election next Saturday.


If the latest voter survey result carries through to the ballot box, then we are on the cusp of the most fundamental change in the Irish party political system since the late 1933.

This is a further boost for Mary Lou McDonald with news from RTÉ also revealing she will not be just “a face at the window” in tonight’s last television leaders’ debate. [...]

The figures suggest Ireland is on the brink of an historic general election result on Saturday. Many historians will look back to a general election in January 1933 when the emerging Fianna Fáil – the party which arose from the defeated grouping in the Civil War a decade previously – took power on entirely on its own steam from the party which was fore-runner of Fine Gael.
The power of intellectual integrity can't be thwarted - Starry (3 June 2019) 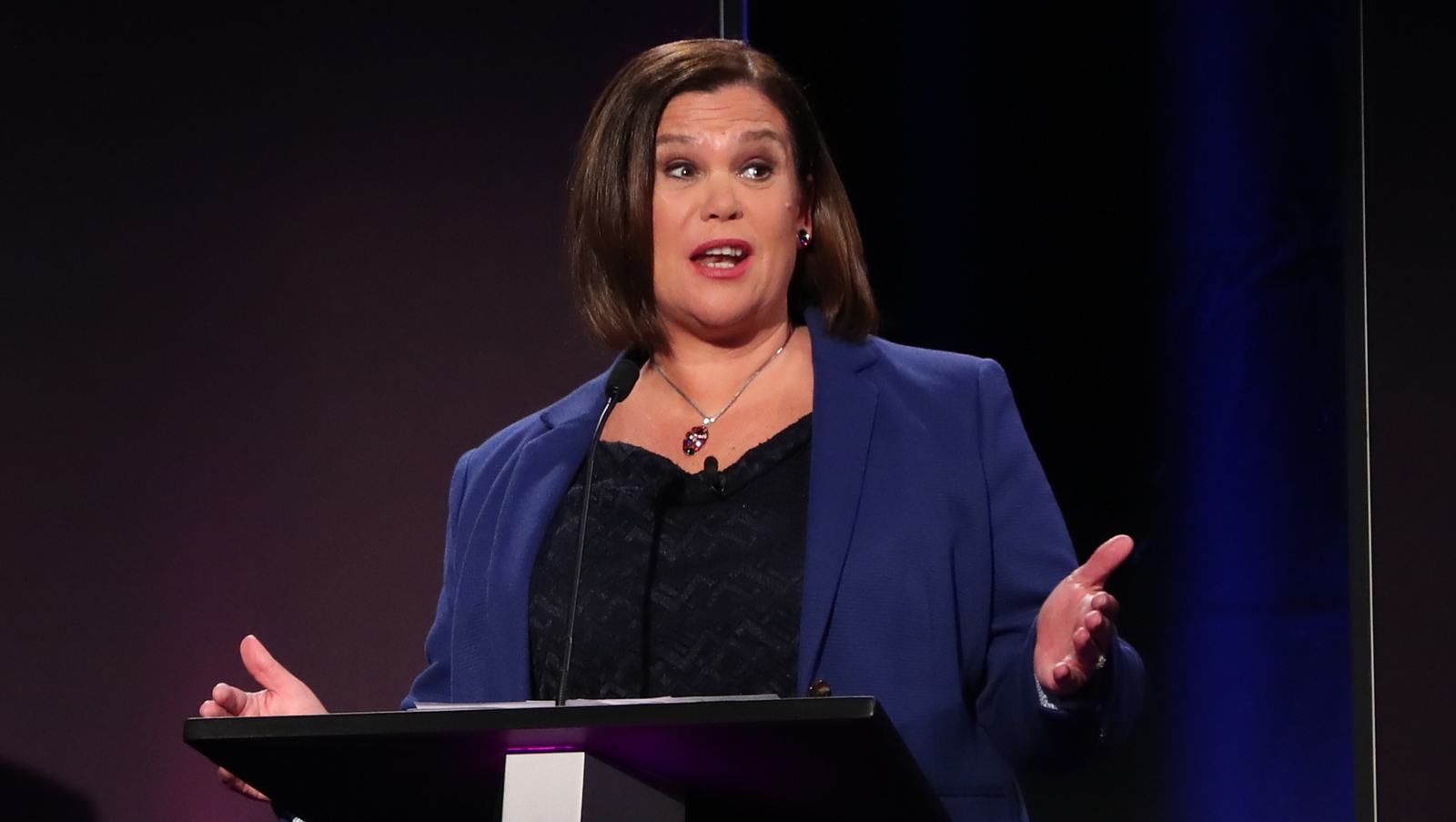 
"However, this afternoon an invitation was sent to Ms McDonald following a meeting of RTÉ's General Election steering committee.​
​
"RTÉ's Managing Director of News and Current Affairs Jon Williams said the dynamic nature of elections had been taken into account by the station's steering committee in arriving at its decision.​
​
"Sinn Féin's director of elections Pearse Doherty welcomed the decision by RTÉ to extend an invite to Ms McDonald.​
​
"He added that it "should not have come down to a last minute decision on the part of RTÉ".​ 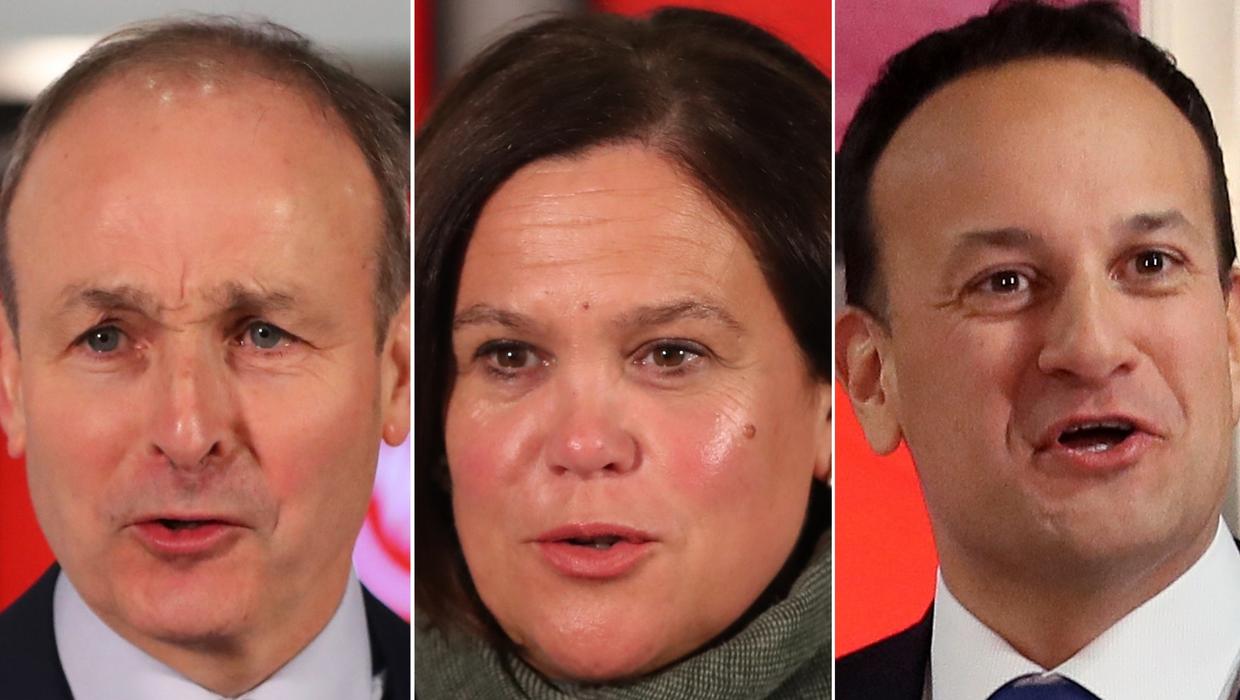 'Sinn Féin on brink of major political breakthrough in Republic'

about 3 hours ago
Subscriber only 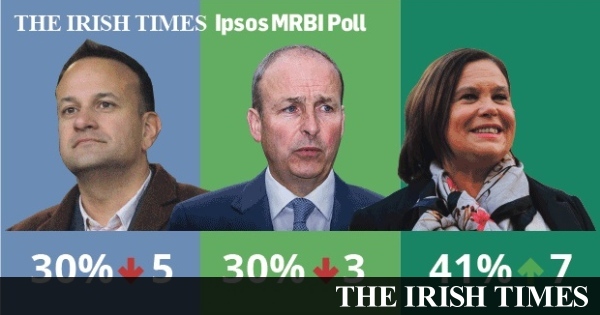 Subscriber Only: Sinn Féin on brink of major political breakthrough in Republic 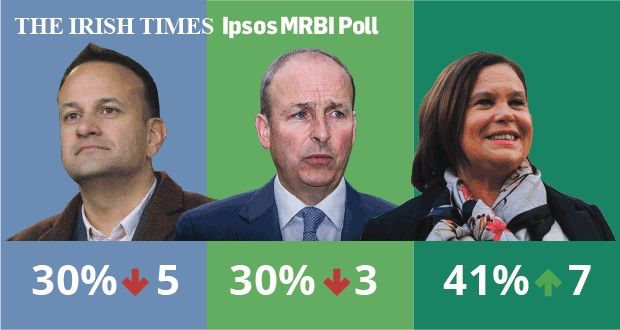 Poll: Who would you like to see as the next taoiseach?

'We’re into the final week of campaigning ahead of polling day this weekend.' 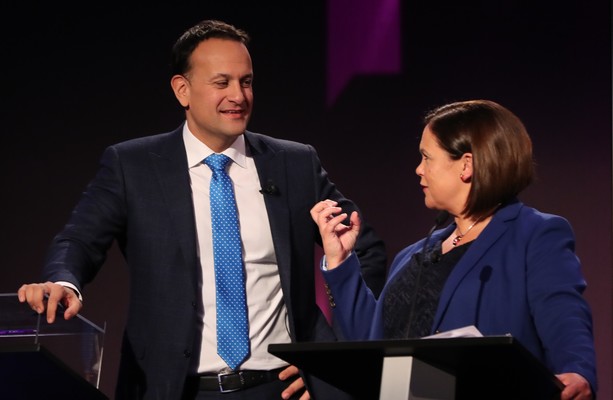 Poll: Who would you like to see as the next taoiseach?

We’re into the final week of campaigning ahead of polling day this weekend. 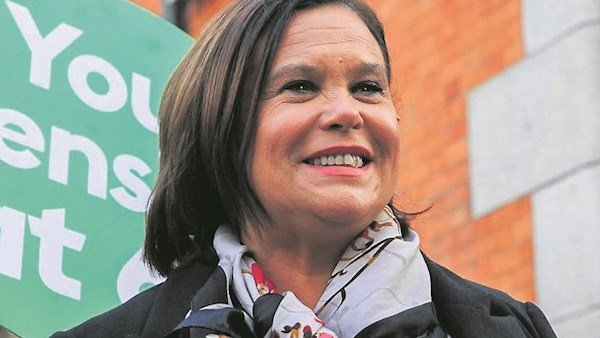 So, just what in the hell is going on?
www.irishexaminer.com


"Firstly, it has stolen a march on the parties by honing in on the pensions issue by calling for the retirement age to be reversed back to 65.​
​
"The measure has caught the imagination of the electorate and has forced the other parties to scramble and amend their positions.​
​
"Mary Lou McDonald too has successfully painted her party as the only real alternative to the Fine-Gael-Fianna Fáil axis.​
​
"Sinn Féin's strongest support is among 25-49-year-olds in Leinster outside Dublin and among lower educated working-class voters. However, the number of ABC1 voters, the best-educated and highest earners, has risen from 13% to 17%.​
The power of intellectual integrity can't be thwarted - Starry (3 June 2019) 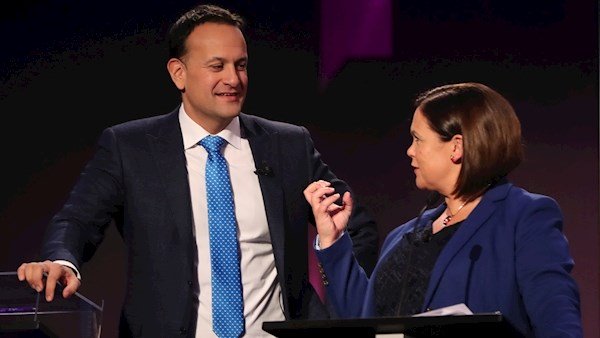 Sinn Féin is the most popular political party in the State after opening up a clear lead over Fine Gael and Fianna Fáil for the very first time since re-entering the Dáil in 1997.
www.irishexaminer.com

[…] Sinn Féin's Director of Elections Pearse Doherty had complained loudly at their exclusion from the debate.​
​
Responding to the decision, he said: "I want to welcome the decision by RTÉ to extend an invite to Mary Lou McDonald to take part in tomorrow’s party leaders’ debate on Prime Time, and I am happy to confirm that Mary Lou will be participating.”​
​
"That being said, this should not have come down to a last-minute decision on the part of RTÉ. Fine Gael and Fianna Fáil wanted this election to be about them, but this election was never about two parties with no real policy differences, who have effectively been in government together for the last four years. Neither of them represent change,” he added.​
​
The crises can only get worse under them (FG&FF coalition). FG&FF don't want any change, they won't fix anything ... they will continue to line their friends' wallets.

FG&FF have treated the Irish people like garbage, with utter contempt.

SF Leader Mary Lou McDonald offers the people an alternative Ireland where there is hope for a better future. I think it's her destiny to become the first female Taoiseach - Mary Lou must grab this opportunity - don't heed advice to wait.

I suggest Mary Lou doesn't get bogged down in details during RTE Leaders Debate, and clearly sets out her vision. They will try and box her in with minutiae. Mary, keep your cool head, but get many kicks in.
The power of intellectual integrity can't be thwarted - Starry (3 June 2019) 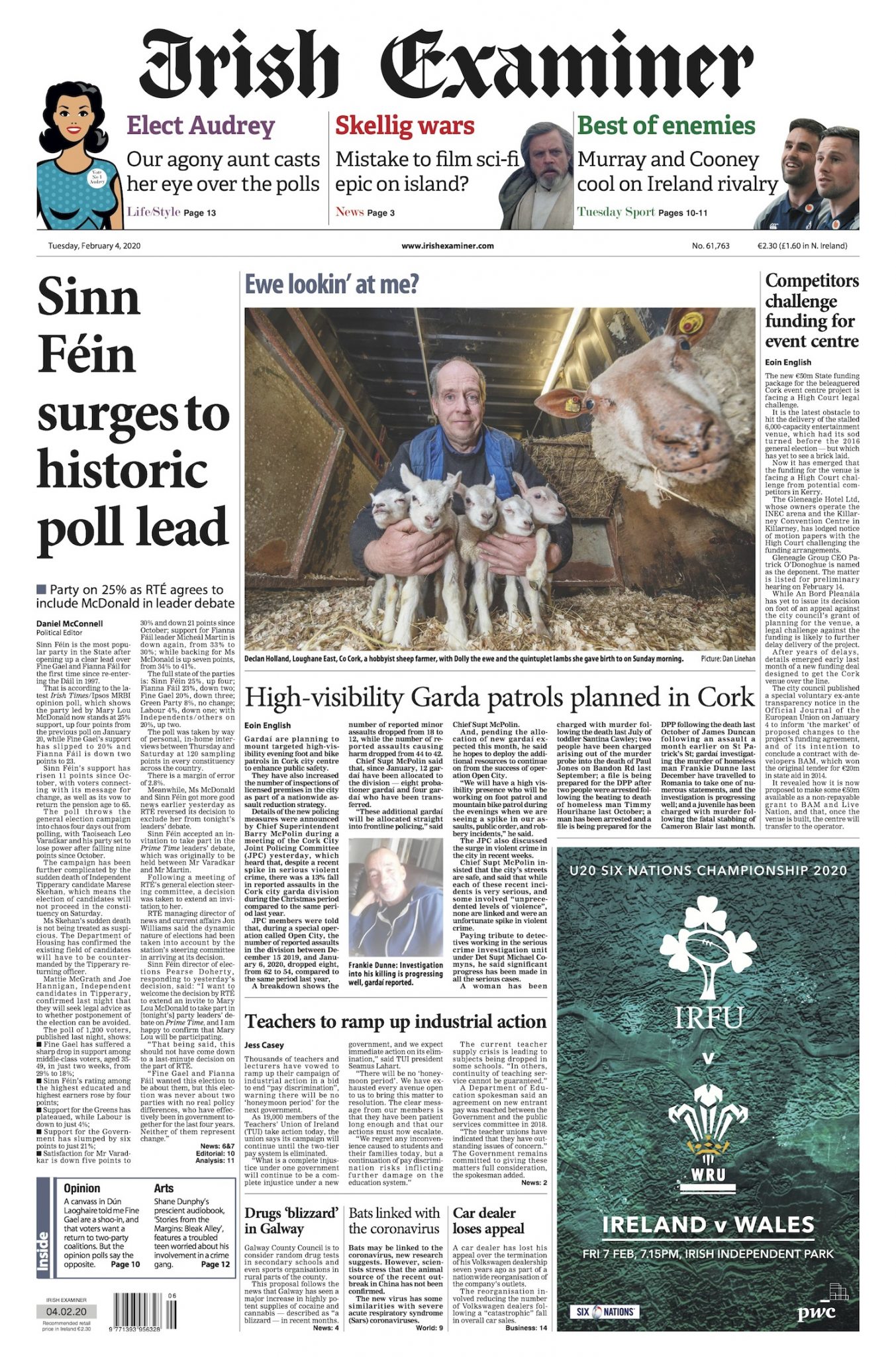 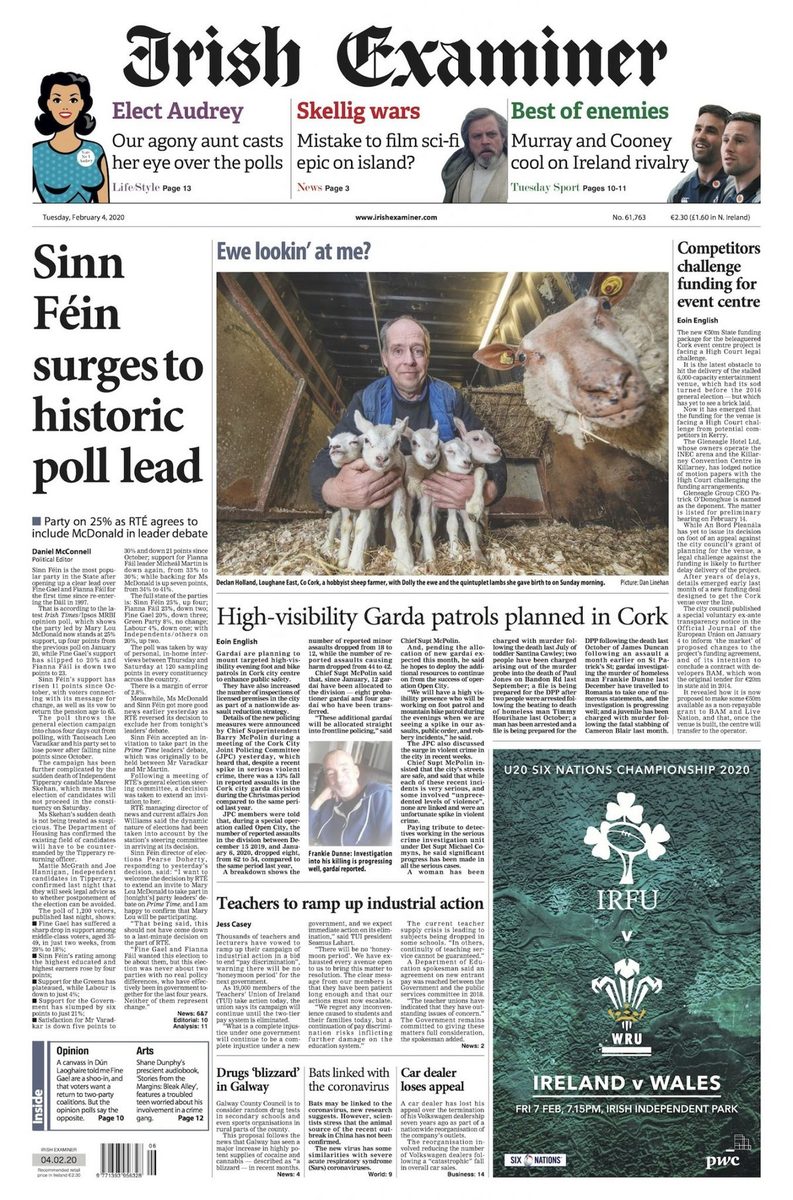 Leo Varadkar is "autistic...definitely on the spectrum...and doesn't know what to do with himself..."

Yes Starry I think you are right about that. Both in the UK and Ireland what I see are attempts to run civilised national institutions down, probably in an effort to get people to sign up to expensive private health care. Which means you get to lie on a double trolley in a more decorative...
politics.ie
The power of intellectual integrity can't be thwarted - Starry (3 June 2019)


Deputy Mary Lou McDonald calmly stood her ground and refused to leave the Dail after she was suspended from the chamber. She had challenged Tanaiste Joan Burton to answer her CLEARLY PUT question regarding water charges.

Scroll to 0:29 in below youtube video where Burton didn't answer Mary Llou's CLEAR question and instead waffled nervously and went off on many tangents, and was over time. Mary Lou's question was left unanswered by Tanaiste Burton.

Mary Lou was doing her job. But the establishment wanted to put a muzzle on her.

Dail Eireann was then suspended. Speaker Sean Barrett's face was puce with rage. The Speaker called a Captain of the Guard to remove Mary Lou from the house. [The CoG was unsuccessful.] 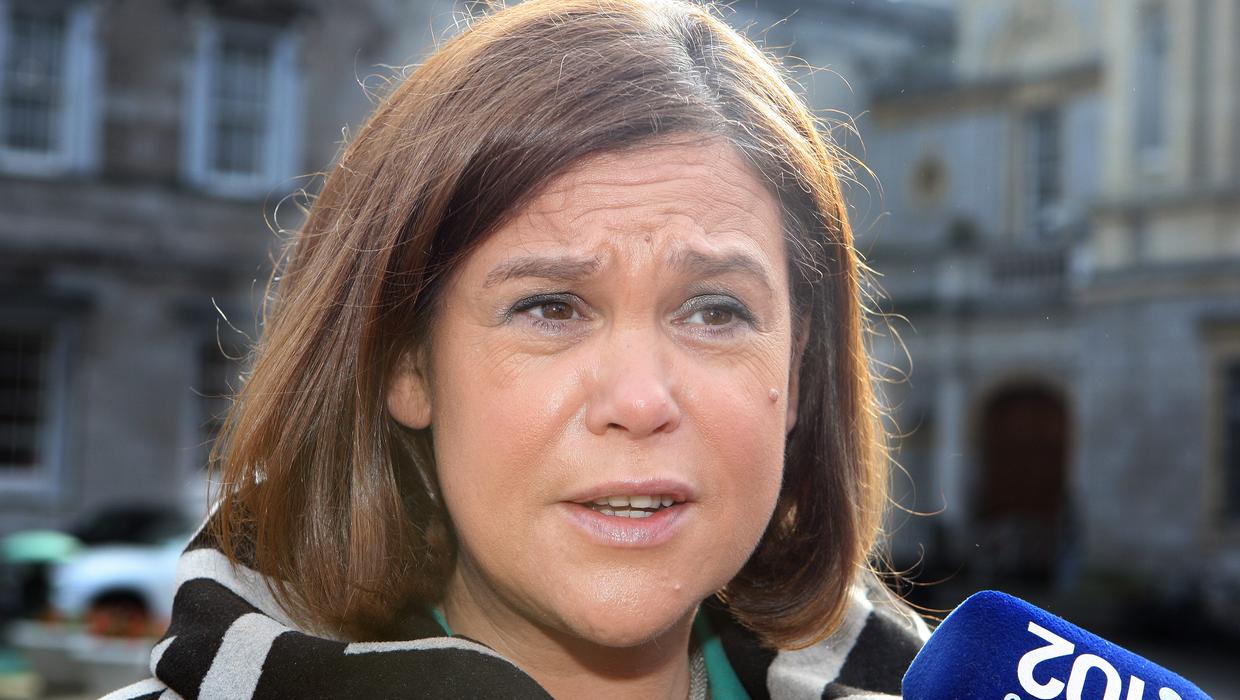 Mary Lou merely asked for an assurance that the State wouldn't deduct water charges (unpaid water bills) from people's wages, pensions, social welfare payments, and she asked about attachment orders - "Make it clear that you will not use such orders by Irish Water in respect of unpaid bills?"


*They should have listened to Mary Lou on water charges.* They are listening to her now!
The power of intellectual integrity can't be thwarted - Starry (3 June 2019)


'Austerity forced me out of Ireland. Now I don’t know how to return' 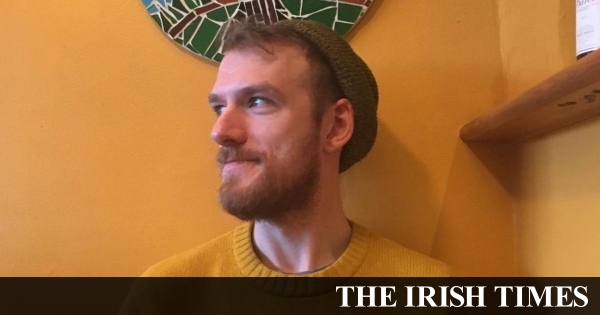 Austerity forced me out of Ireland. Now I don’t know how to return

"Within three months of arriving in London I’d a job (in a shop), a room to rent, and a prescription for selective serotonin reuptake inhibitors(SSRIs). [...] Within a year I’d my first job and I’ve held onto that career since. I’m usually not depressed anymore. So now I have something to lose.​
​
[…]​
​
"The recession is over, but austerity trundles on gleefully and the economics that drove us from the country, which inflates housing costs, and empty our villages and crowd our cities to bursting, still continue.​
​
"If there’s a trap, [...] it’s the one that reserves houses for the offspring of the wealthy, and rentals for those with jobs that happen to pay well (for now). It’s the trap that shuts up shops and bars the way of newcomers and the returning.​
The power of intellectual integrity can't be thwarted - Starry (3 June 2019) 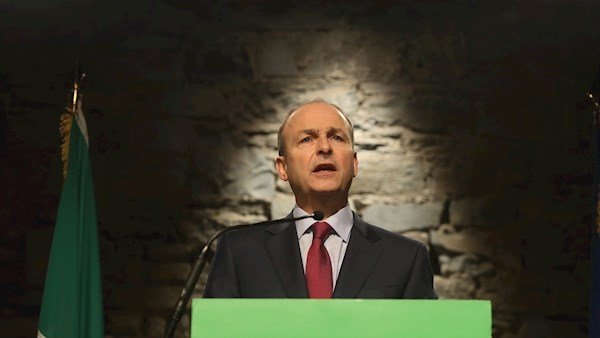 Gary Murphy: A ‘soldier’ for decades, is it Martin’s destiny to finally be Taoiseach?

The Fianna Fáil leader became a TD in 1989 and has had four ministries, but the role he covets might elude him unless he can convince he is for change, writes Gary Murphy.
www.irishexaminer.com


"Change has been the dominant motif of the election campaign, but Fianna Fáil leader, Micheál Martin, has struggled to portray himself as the agent of that change.​
​
[…]​
​
"The problem was he then spent considerable time apologising for his party’s role in the economic crash of 2008.​
​
"It is difficult to pull off the trick of being awash with new ideas when continuously being pressed about the past.​
​
"Martin then struggled to explain the party’s position on the amount of houses it would build if returned to office.​

I think Martin is a dogmatic leader (his conditioning) - remnants of the old regime - and not a pragmatist - listen to him talking about Sinn Fein. Mary Lou is a realist. People relate to her.
The power of intellectual integrity can't be thwarted - Starry (3 June 2019) 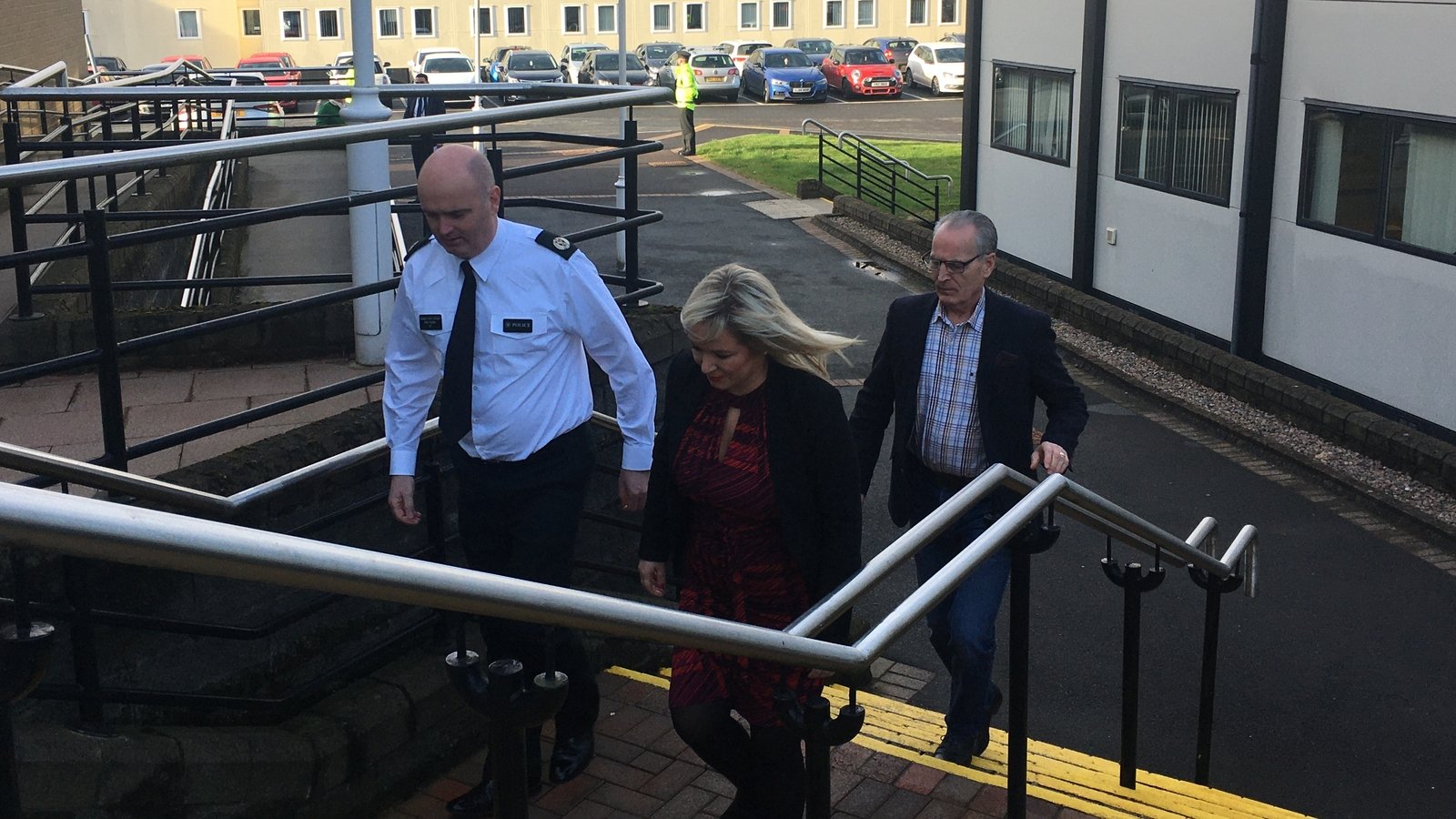 All members of a fair society should 'own' the police service, support it and join it.
Joining the police has long been off the career options considered by northern nationalists ( for many reasons, a fear of what you will be asked to do, a fear that you will be regarded with suspicion and distrust, and of course a whole unfamiliarity, to be a ground-breaker, when you've never known anyone personally or in your acquantance who worked for the police) - but such attitudes must change in order to build a modern society, and Michelle is acting very responsibly and giving a lead.
Well done! 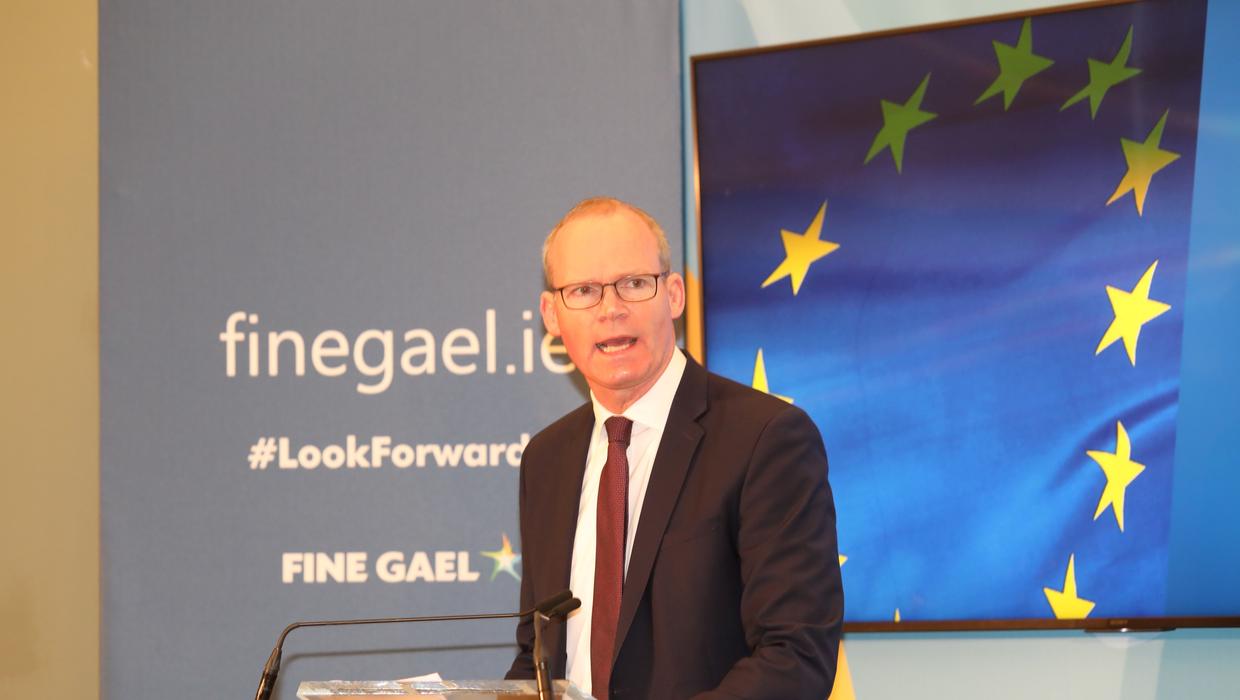 TÁNAISTE Simon Coveney has said there is “no question mark” over Taoiseach Leo Varadkar’s future - despite polls showing the Fine Gael could be on course for its worst-ever election result.

Sinn Fein has only 42 candidates standing for election , on a very good day they might get about 35 elected, FF have over 80 seeking election . even on a bad day they are going to get over 40 elected , FG have about 80 also ,so even on a very bad day they will get over 20 elected. So it looks like a FF and SF Government with a few gene pool FF like the Healy Reas and Mattie McGrath. It could be a great Government but in my mind its Trokia back again in about 3 years.
J

culmore said:
FG have about 80 also ,so even on a very bad day they will get over 20 elected.
Click to expand...

That's your lower limit for FG?
Regards...jmcc
B

TÁNAISTE Simon Coveney has said there is “no question mark” over Taoiseach Leo Varadkar’s future - despite polls showing the Fine Gael could be on course for its worst-ever election result.

If this result is as bad as it looks for Fine Gael then Leo is Chop Suey !

RTE news commentator just said each candidate had to demonstrate how straight they were.......

blinding said:
‘ So what he is saying is "

If this result is as bad as it looks for Fine Gael then Leo is Chop Suey !
Click to expand...

The debate is here - I just posted this - ABOUT THE GOVERNMENT POLICIES ON HOUSING IN TATTERS - Fr Peter McVerry tells it how it is..

For any normal person a reference to 'The x election' will mean the most recent x election. Dear God :rolleyes: When referring to and criticising RTE and a Presidential election , anyone with even a passing knowledge of politics would know its a reference to 2011 and tweetgate :rolleyes...
politics.ie
The power of intellectual integrity can't be thwarted - Starry (3 June 2019)

I am not sure there was a winner. I think Martin lost big time. But on the 3 points that Mary Lou was weak on. The SCC , Paul Quinn (rip), and electric cars. The people who will be considering voting SF will not be influenced by any of them. On her claim that Demographics will sort the pension...
politics.ie

Presenter's question to coalition leaders - Leo Varadkar and Micheal Martin : "What do you two think is the main difference in your styles?"

Micheal's Answer: "I have holes in my sox, should any one query my champagne lifestyle - I mean, hmm - working class lifestyle."