Deutsche Bank has warned further cost cutting might be needed as profits tumbled in the second quarter amid low interest rates and volatile markets.

Germany's biggest lender was dubbed the world's riskiest bank by the International Monetary Fund last month, just as one of its U.S. businesses failed a Federal Reserve stress test.
Click to expand...

Next we have DUTCH Bank ABN AMRO:

One of the largest Dutch banks, ABN Amro, has now warned its business clients a negative interest rate on the business accounts is in the works. The bank is currently updating its terms and conditions and will more specifically include its right to reduce the interest rates below zero as the bank wants to ‘protect itself’ against the continuously changing market circumstances.
Click to expand...

I assume that means one will need to pay even more to store your cash in the bank.

Europe’s biggest banks are braced for the outcome of financial health checks that could expose the extent of the weaknesses of the world’s oldest bank, Monte dei Paschi di Siena (MPS), and send shockwaves through the markets.
Click to expand...

Here is a particular view from the UK ..

Mellon on the Markets - Master Investor

The Italian banks are really in a mess, and more evidence of this has been emerging in recent weeks. Make no mistake, there is no easy fix for these institutions, which, in every single case, are bust. There isn’t enough money, or indeed sufficient will, to rescue them. Italy, now 10 per cent smaller in real terms (economically) since the financial crisis started, will soon have no option but to leave the Euro. There is no way Draghi can pull a big enough rabbit out of his magical hat to avert this ..
Click to expand...


Looks like 2008 is still with us, never left us. All we did was brush things under the carpet, kicked the can out as far as possible BUT is the Can a boomerang Can coming back to squarely hit us in the face? Is this the perfect storm with a solid dollop of ISIS Terrorism in Europe to make that storm stormier?

Is EU falling back into recession? Has it ever come out of recession .. really? Are a few more EU and/or EZ Exits now probable out of economic necessity rather than social?
Last edited: Jul 27, 2016

Global QE has never been greater. ECB and Bank of Japan buying around $180B assets a month combined. Via Deutsche
Click to expand... 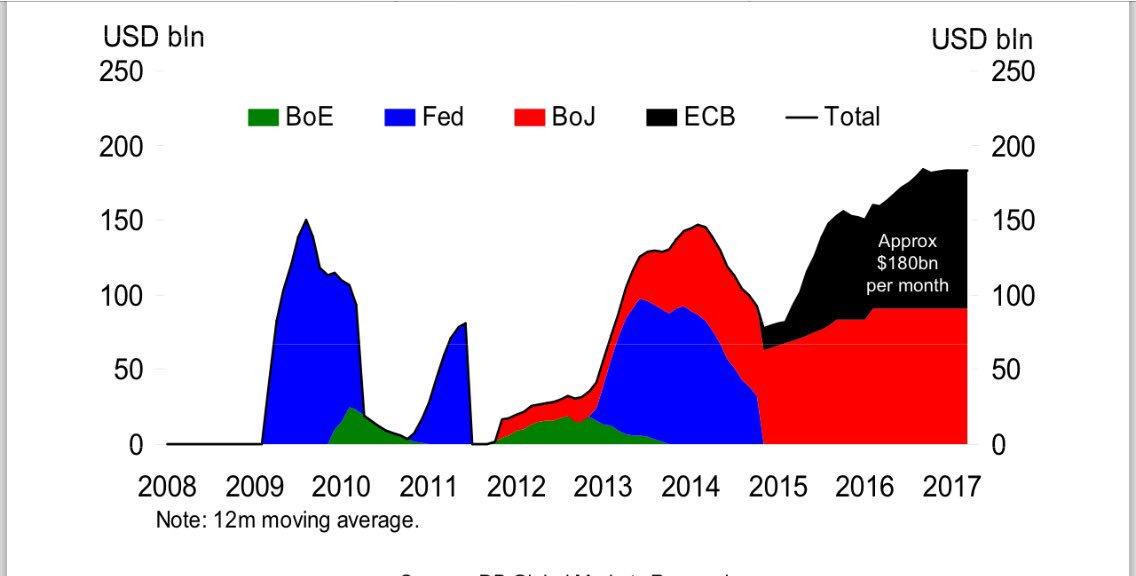 You left 'in a matter of days' out of the title.
Let us consider the Serapeum of Alexandria.
R

statsman said:
You left 'in a matter of days' out of the title.
Click to expand...

Well, STATSMAN ... for just PIE here I wanted to have as catchall a TITLE as possible to make this a central banking type thread for EU bank happenings.

Your point noted however

Wasn't Super, bazooka-wielding, Mario responsible for overseeing this bank when it got involved in a dodgy derivatives deal to mask its accounts in 2010 (something like what GS did for Greece)?

The Goldmanite banker then went and got promoted to the top banking job in the EU.

2nd mention of this:

“While I don’t think they [Italy] will try and pull out of the EU, they may hold a referendum on pulling out of the eurozone.”
Click to expand... 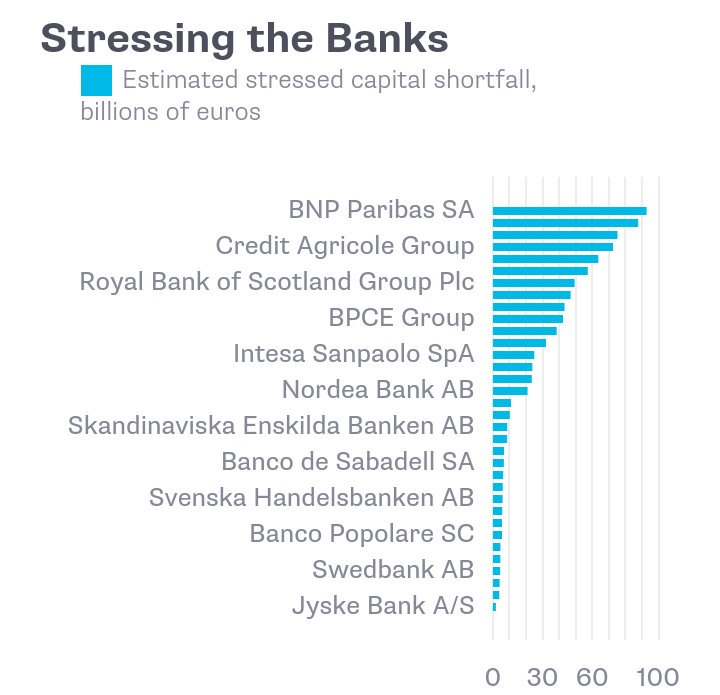 Wheres Deutsche Bank in this list one wonders?
R

Standard and Poor's (S&P), one of the world's top credit ratings agencies, has branded the current European Union "unsustainable" as it outlined the urgent need for reform.
Click to expand...

The politicians were warned but paid loads of no heed , the cards with start tumbling and it will get nasty
Last edited: Jul 27, 2016

No way is the neoliberal EU going to change course

Well these boys know their snakes and ladders.

Back in 2005, they made it clear that they intended to write the debt of many EU countries as junk by 2020.

The Lisbon Treaty was all to do with Growth.

Growth will be nil in an ageing society.

In addition to funding for much greater number of pensioners.

'Discount the wealth of a childless Nation, you get ZERO value' Taken from the editorial Mayo Association Yearbook 2002.
No warning can save a people determined to grow suddenly rich. - Lord Overstone.
Hadn't met any Irish people that were afraid of anything - Christine Lagarde. 2008.

Of course the ECB stress test results are due Friday and everything will be kosher.
D

The solution to their problems is a simple war.
L

Goldman Sachs will be along in a while to do some massive currency swaps and then the books will balance.

For a while anyway.

Goldman Sachs will be along in a while to do some massive currency swaps and then the books will balance.

For a while anyway.

The Global Banking system was insolvent in 2009. Making every country in the World insolvent in order to pretend that they were not was the biggest confidence trick ever employed.

Ah well. At least the billionaires are now multi billionaires, which was always the intention.

The job is oxo, as we used to say. Not a country in the World now, that is not in Private ownership.

We already have it; I guess, not the one you think we need


richie268 said:
The solution to their problems is a simple war.
Click to expand...

The future alternative is to live in a world of CHAOS! Listen! The politicians on Capital Hill called for restrained and no panic selling on the opening of Wall St. after the Sept. 11th. (Read the story of the Mayoman living in New York who also witnessed the events of the 1929 collapse, see MAYO PROFILE  Patrick Boyle by Enda Brogan in this book). What happened! Investment and finance went galloping away faster than the Lone Ranger ever did and got to hell out of there! Wall Street had the biggest collapse for a long time. Demographics of the Western World are all wrong to withstand such a shock! Message: Finance and one particular country are not inextricably linked. Dont build your future on wealth alone. The real wealth of a country is in its children and how well they are looked after. Discount the wealth of a childless Nation, you get ZERO value! ceteris paribus. Not writing here about individual family units, but from the Macro end of things. Money and investment will eventually flee a country whose birth rate continues to fall; this is only pure logic, but maybe not to those people who are living above their station! i.e. lacking pure handed down foundation principles of life (Christian, Islamic or whatever)!

The proponents of core Christianity are in the main, few in numbers. The Western World has become weak as a result. It is not that Islam is getting stronger. The current world problems are there; because an element in the Islamic world recognises this inherent weakness, and hope to reap some advantage by causing panic with terrorists deeds and will continue to do so throughout the 21st Century! Bosnia, Afghanistan, where next?

The continued absence of high-ranking conservative clergy with a meaningful place at some of our great occasions both on an international, national and local level is very noticeable. Their advice is no longer sought to the detriment of our society. Our media try their utmost to make caricatures out of them. They appeared to be shunned; could it be that we are ashamed of something!

Proprium humani ingenii est odisse quem laeseris Tacitus, 55-117! A.D. (It is human nature to hate the man whom you have hurt!). Taken from the editorial Mayo Association Yearbook 2002.
Click to expand...

No warning can save a people determined to grow suddenly rich. - Lord Overstone.
Hadn't met any Irish people that were afraid of anything - Christine Lagarde. 2008.

Italy is really in a bind at the moment as regards her banks.

Renzi is looking to bail out their insolvent banks. His formula for bailout is against EU rules however.

It will be worth watching to see what type of fudge gets agreed in order to save these bankrupt Italian banks.
R

gerhard dengler said:
Italy is really in a bind at the moment as regards her banks.

Renzi is looking to bail out their insolvent banks. His formula for bailout is against EU rules however.

It will be worth watching to see what type of fudge gets agreed in order to save these bankrupt Italian banks.
Click to expand...

We dont use Fudge in the EU we use a CAN .. It will be interesting to see how far that Can gets kicked now re Italian Banks and other Banks in EU. Extend and pretend. But in fairness FOR THEM - the EU top bods - this can kicking / extend and pretend thing has worked FOR THEM - so why change a winning formula.

I assume that means one will need to pay even more to store your cash in the bank.
Click to expand...

Cashless society is on the way to deal with that.

Sweden the world beaters in national suicide are leading the charge...

I understand it the Bjorn from the band Abba is the face of the cashless movement.

Karloff said:
Cashless society is on the way to deal with that.

Sweden the world beaters in national suicide are leading the charge...

I understand it the Bjorn from the band Abba is the face of the cashless movement.

The bit in bold is a blatant inaccuracy, in fact Sweden doesn't even have the highest suicide rate in Europe. Nor is it in the top 25 countries in the world by suicide rate. Not something to be joking about son.
Just because you were born in a stable doesn't mean you're creator of the universe
You must log in or register to reply here.
Share:
Facebook Twitter Email