"The Gran Torino Problem" and the decay of US white communities ....

Maybe the other racial groups already had these issues among their poorer people, and now the white group are becoming the same?

It still might be about income/status, etc.
Woman: Adult human female

talkingshop said:
Maybe the other racial groups already had these issues among their poorer people, and now the white group are becoming the same?

I think that is one of the major issues.

Earlier, someone pointed out the extreme example of Indian tribes forced onto reservations to live on the white man's dole, with only whiskey as a comforter. Black communities were ravaged by heroin and crack cocaine, then by the collapse of families, gun and gang violence and lawlessness. Russian communities suffered similar collapses after fall of Communism, accompanied by the disintegration of the economy.

Income and status are important - no matter who you are. In Respect: The Formation of Character in an Age of Inequality(2003) Richard Sennett wrote about inequality, adult dependency and degrading forms of compassion. Respect is the commodity that these communiites have lost, both black and white.

But the main effort in the US is to prevent a dialogue between blacks and whites, or to scapegoat one group, or blame immigrants as the "single cause" of all the woes.
"A wise man proportions his belief to the evidence" - David Hume

Was this when the shrinking of the Social Welfare safety net that had begin under Reagan and continued under Bush and Clinton took hold in earnest and began to have a visible effect? Or was it the export of jobs and the hollowing-out of the manufacturing economy.

The Drugs Deaths chart is the most striking - something like 5 times what it was in 1970. Alcohol deaths have returned to pre-1900 levels, and similarly for suicide, most of which are by gun. 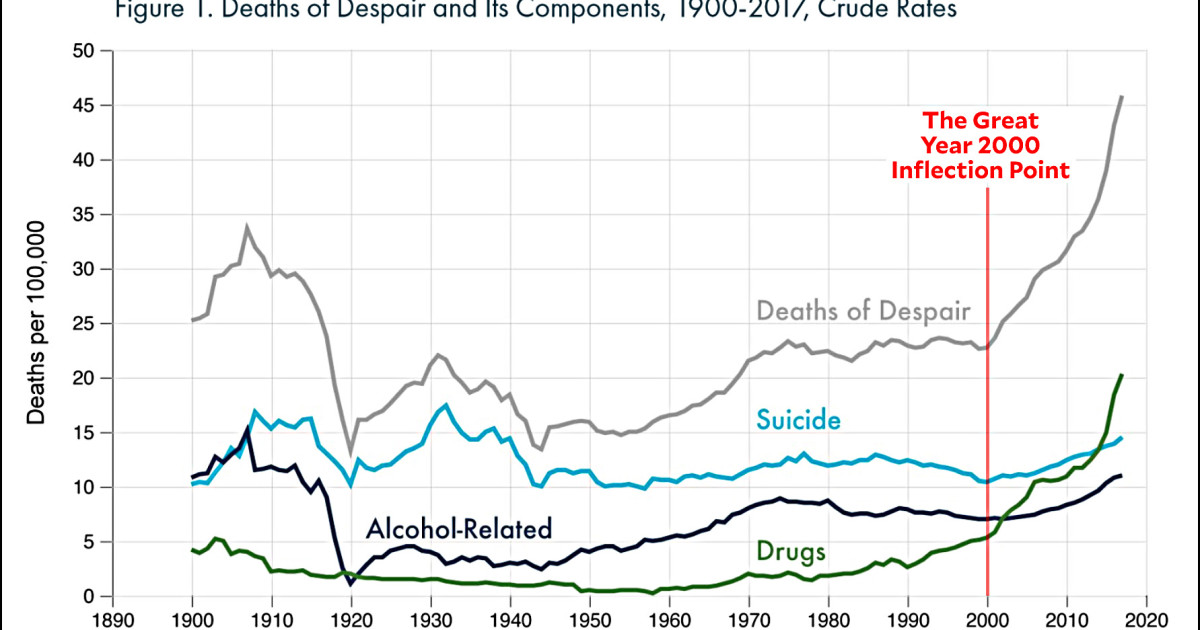 Revisiting the great inflection year of 2000