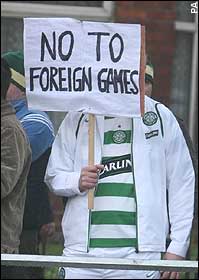 Faked by the Indo. 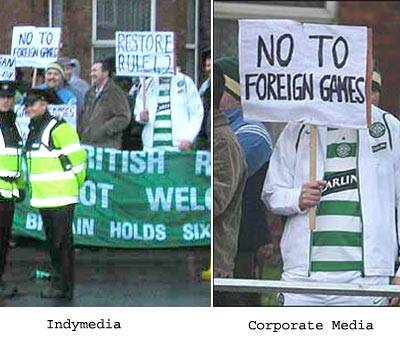 flavirostris said:
Have to confess to being a bit of a burrito addict. There's nothing like a good burrito, packed with brown rice, pinto beans, chicken, cheese and the hottest salsa they have.

San Francisco has to be the burrito capital of the world and it boasts the mecca of burrito joints 'La Taqueria' on Mission St. People queue around the block at this place. And the tacos are almost as good.
Click to expand...

It's not authentic unless served by a poor, oppressed Mexican with unwashed hands.

Levellers said:
Faked by the Indo.

Now, that is interesting.
That 'photo' has assumed iconic status.

Apparently, 27% of us trust the media.

Half Nelson said:
It's not authentic unless served by a poor, oppressed Mexican with unwashed hands.
Click to expand...

The burritos in SF are always served by Mexicans ( dunno about the unwashed hands but they taste damn good ). So there is a guaranteed authenticity there for the hipster consumer.

There should be Catholic iconography and soccer posters in the Taqueria for a feeling of real authenticity.
"Criticising the EU in Ireland in the 2010's is like criticising the Catholic Church in the 1950s. You run the risk of being lynched by brainwashed fanatics." - Volatire
T

Quebecoise said:
You are not American. The Irexit crowd are trying to normalize American news in Ireland to try and convince people that what happens in Oregon is as important as what happens in Mayo. Their ultimate agenda is for Ireland to leave the EU and join the US, for Ireland to become the east coast Hawaii. They already mentally live there anyway.
Click to expand...

There is nothing US centric about these social forces and impositions.

This is global "intersectional feminism". It is coming this side of the Atlantic, just like every other SJW inanity that originated in the US.

flavirostris said:
There should be Catholic iconography and soccer posters in the Taqueria for a feeling of real authenticity.
Click to expand...

Plus the vendors should be paying protection to drug cartels.

I wonder do SJWs ever stand back and think about their idiocy for even a millisecond. If we are not allowed shift cultural moorings and change styles and mores, even temporarily, we are basically locked into whatever we grew up with. So for middle class saith Dublin hipsters this means they should stop aping their San Francisco betters and get back to what their grandparents did: go to Mass, eat turnips.

Oregon is where those who are too nutty for California move to.:lol:
Better to stay silent and be thought a fool than to speak and remove all doubt - A. Lincoln
T

"As soon as Willamette Week, who has a history of publishing racially insensitive food commentary, published this story, people of color were outraged. Even some of those aforementioned super liberal white people. The comments on the article went up in flames, and pretty soon the story was even picked up by a national outlet."

This is a satirical paper...

"As soon as Willamette Week, who has a history of publishing racially insensitive food commentary, published this story, people of color were outraged. Even some of those aforementioned super liberal white people. The comments on the article went up in flames, and pretty soon the story was even picked up by a national outlet."

Satirical? They're serious about this nonsense I thought?
Woman: Adult human female
E

Congalltee said:
I presume this is photo-shopped. (Still a good one though).
Click to expand...

No it isn't. Various Indymedia types at the time claimed it was, but the photographer subsequently verified it. It is a gem.

One of the latest fads of the SJW Libtard brigade is "cultural appropriation". And these numpties are now on a crusade to shut down restaurants that are "appropriating other peoples' cultures". I kid you not.


And they have their first victims. Two young small business owners who started a popular Burrito cart:

Check out the stuff that is bouncing around the empty heads of these idiots:

Huzzaah! One racist burrito cart down. A number of Chinese and Mexican restaurants to go!
Click to expand...

gleeful said:
Burrito stand at the other side of the world closes down. Not sure this topic warrants a thread on politics.ie
Click to expand...

Do you really think it is just about a Burrito stand? Very narrow minded thinking , is this not supposed to be a discussion board.

What do you think of the process that ended in them shutting down?

Do you think they were been racist because of their cultural appropriation?

We have a worst of p.ie froth-piece, recycled from — yes! — Fox News — about a triviality in the Great State of Oregon. From Faux News to every defender of right-on! opinion on the Web, to the Daily Mail.

Obviously we are dealing in solid and well-polished excrement; but I'll take it seriously.

I'd reckon on three main heads:
1

Let it be understood: I l-u-r-v-e Oregon: not only is it eminently civilised, with great beer, I can buy my Apple gear with no sales tax.

Portland used to be a hard-scrabble place, exploiting the natural resources, especially the forests, and exporting them. Consequently it had a reputation — well-deserved — for gangsterism, racketeering and exploitation.

The Second World War didn't change that: just made Portland bigger and seedier. Working girls piled in to service the Navy. It became a base for mass-producing vessels for the war economy. The black population expanded to do the dirty work the white folks wouldn't.

Portland became an overflow for the San Francisco hippies. Intel set up shop. Suddenly Portland had a higher proportion of graduate professionals than anywhere else. In terms of GDP, Portland was the most productive place across the US.

The very nature of bourgeois Portland's open, democratic, liberal, environmentally-conscious lifestyle is why the alt-right types hate it. The underlying ethnic/economic tensions are what they seek to exploit.

Hence my sense of déjà-vu, my feeling of coincidence, at coming on this thread just after I read Jason Wilson in The Guardian. Wilson is, I believe, based in Portland, OR.

Hiding in plain sight: how the 'alt-right' is weaponizing irony to spread fascism
Click to expand...

From past experience, I know full well that the usual types are totally incapable of making that hot-link, so here's a taster:

Last week, the Data & Society Institute released a report on the online disinformation and manipulation that is increasingly shaping US politics. The report focused on the way in which far-right actors “spread white supremacist thought, Islamophobia, and misogyny through irony and knowledge of internet culture”.

One of the report’s authors, Dr Alice Marwick, says that fascist tropes first merged with irony in the murkier corners of the internet before being adopted by the “alt-right” as a tool. For the new far-right movement, “irony has a strategic function. It allows people to disclaim a real commitment to far-right ideas while still espousing them.”

Marwick says that from the early 2000s, on message boards like 4chan, calculatedly offensive language and imagery have been used to “provoke strong reactions in outsiders”. Calling all users “fags”, or creating memes using gross racial stereotypes, “serves a gate-keeping function, in that it keeps people out of these spaces, many of which are very easy to access”.

Violating the standards of political correctness and the rules of polite interactions “also functions as an act of rebellion” in spaces drenched in adolescent masculinity.
Click to expand...

We've all witnessed that in these forums.

Finally, then, to Kali Wilgus and "LC" Connelly.

The whole kerfuffle started with an interview in Williamette Week, one of the two Portland "alternative" weekly free-sheets — those publications found in every major US city in the kerb-side bins. That interview can be accessed here.

Because there are two Portland "alternative" weeklies (you spotted that essential, didn't you?), the other one, the Portland Mercury ran with the story, with a blogger (Jagger Blaec, who specialises in this niche market) underlining a political point:

As soon as Willamette Week, who has a history of publishing racially insensitive food commentary, published this story, people of color were outraged. Even some of those aforementioned super liberal white people. The comments on the article went up in flames, and pretty soon the story was even picked up by a national outlet.

Following the WW’s article, one commenter said: “Now that you all boldly and pretty ****ing unapologetically stole the basis of these women's livelihoods, you can make their exact same product so other white ppl don't have to be inconvenienced of dealing with a pesky brown middle woman getting in their way. Great job.”
Click to expand...

As if to ward off lightning striking twice, the current edition of Williamette Week has a major news feature on:

White Supremacists Are Brawling with Masked Leftists in the Portland Streets. Homeland Security is Watching.
Click to expand...

But this "cultural appropriation" lark. What's that?

Were one to attempt to sell recycled-meat-in-a-bun as "Big Macs", or fizzy drink as "Pepsi", I'd give a matter of hours before the whole weight of the law dropped in. That's the capitalist system, and its dependant apparatchiks, protecting their own. But dealing tortillas on — wait for it! — Cesar Chavez Boulevard, that's something else?
Last edited: May 26, 2017

I move that we ban mashed potatoes for appropriating the culture of the Aztecs. :roll:
"It is not those who can inflict the most, but those who can suffer the most who will conquer." Terence MacSwiney
H


I thought that Ray Barretto was dead...
G

Anyone remember The Flying Burrito Brothers?

I cant find their version of this, but here you go

Dame_Enda said:
I move that we ban mashed potatoes for appropriating the culture of the Aztecs. :roll:
Click to expand...

You can fúck right off, cos that means chocolate is gone too.