The Third Year of the Trump Presidency

Its now the third year of his first term so a new thread was needed.

[video=youtube;eNNEF1DKdfk]https://www.youtube.com/watch?v=eNNEF1DKdfk[/video]
"It is not those who can inflict the most, but those who can suffer the most who will conquer." Terence MacSwiney

Ah Jaysus not another threat on this clusterfook!
J

President Bartlet said:
Ah Jaysus not another threat on this clusterfook!
Click to expand...

All thos political experts were telling everyone who would listen that Trump would be gone in the first year. Then it was the second year. Now it is the third year. One of the longest running threads on P.ie is the "Trump gets caught" thread. Perhaps some need psychological help to get over Trump winning the presidency.
Regards...jmcc
B

It is has been a glorious two years for America , big tax cuts , needless regulations gone , huge job growth among all demographics but especially Latino and African American people , big success's on the foreign affairs front with Isis in retreat , little Kim coming to the negotiating table and talking about denuclearisation and other NATA members finally realizing they have to pay their own way. Two top class judges appointed to the SC , On top of that a much improved substitute for NAFTA and a likely much improved China trade deal on the way.

If the next two are near as successful then he will go down as the all time great president. 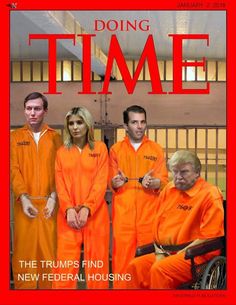 OMG, Barr said 'a phenomena' rather than 'a phenomenon'. My salts, please.

The man has a hard time saying yes or no to any Trump-related question.

Five more years to go.
There are only two genders.
T

I've been watching bits and pieces of the Barr hearings. Haven't heard a single reason to justify voting against him.
I'm living in America, and in America, you're on your own. America's not a country. It's just a business. Now f***ing pay me.

Telstar 62 said:
Russia donated $0 to Donald Trump.
Russia donated $145,600,000 to the Clinton Foundation.
But Trump is the one under investigation....
Click to expand...

Unsure is an apt emoji there. It remains to be seen what the Russians gave Trump, one way or another.

Ardillaun said:
Unsure is an apt emoji there. It remains to be seen what the Russians gave Trump, one way or another.
Click to expand...

After nearly theee years you would think they would have found something if it was there.
There are only two genders.
V

The world was sinking into a cesspit of commie leftie greenie lib loon government. Same as France. I and hundreds of thousands of others would do anything short of murder to get him elected. This was in America, Europe and Russia. No one wanted Hillary.

He promised to drain the swamp, which was a declaration of war. We all knew that war would be a dirty fight. It would have many skirmishes. The world could recover from any action Trump takes, but it can never recover from the actions Hillary would have taken. Trump is a Clint Eastwood type, he sticks with the plan and as Eastwood would say "No one [/B]said it was going to be easy" No one gets through a war unscathed, its the children of the next generation who benefit, not the soldiers.

Congratulation Donald on making it half way.

Among this group, only 45% said they approved of the job Trump is doing as President, according to a recent CNN poll conducted by SSRS. That is the lowest level of support among this subgroup by 1 percentage point in CNN's surveys and a dip from a poll conducted in early December, before the partial shutdown, when 54% of whites without college degrees approved of his job as President and 39% disapproved.
The dip is notable since among whites who hold college degrees, Trump's ratings are largely unchanged in the last month and remain sharply negative -- 64% disapprove and 32% approve.
This trend is backed up by a new Quinnipiac poll released Tuesday. Approval for the President remained somewhat stable between its mid-December poll and now among whites without college degrees (down from 56% to 53%), but disapproval increased from 37% to 43%. That is going from a net 19% positive approval to a net 10% for Trump, a 9-point loss.
Click to expand...

Latest polls not looking great.
I'm living in America, and in America, you're on your own. America's not a country. It's just a business. Now f***ing pay me.

The upside for him is that a dip in support amongst white voters without college is probably recoverable. But the reason it has probably dipped is that the news clips start to be dominated by that same group having to work without pay, having Trump defenders claim it is like a 'vacation'. This is also a demographic that might support the wall - but when forced to confront a choice between them and people like them going without pay, or a wall, it seems like a lot of them want to end the shutdown.

So Trump's now in a difficult spot. He could recover amongst the white non-college demographic. But it would probably require an end to the shutdown. And Dems have no incentive to end it on terms favorable to Trump given the polling. Which means dealing with the fallout of not delivering a wall. And because Trump backed himself into a corner, he can no longer paint border security, more staffing, immigration reforms as a win. He made this all about a wall. An actual wall. Anything less is now, by his own standards, a failure.

Or he can keep the shutdown going. But doing that probably means more and more stories of ordinary families - the sort of families that white voters without college degrees empathise with - going without pay. And eventually being unable to pay rent or mortgages, or put food on the table.

I think if he gets the wall his ratings go up significantly.
I'm living in America, and in America, you're on your own. America's not a country. It's just a business. Now f***ing pay me.

Sync said:
I think if he gets the wall his ratings go up significantly.
Click to expand...

Probably. I don't see how he gets the deal.

The Dems need to play it carefully. They need to continue to do the visuals of looking for a deal. But so far the polls work in their favour, so they have no reason to give him a victory.

That could change, of course. But it seems more likely now either that he tries to do it unilaterally through a state of emergency (and watch as all his fans here and elsewhere tell us how it's all fine for the executive to override the legislature on the pretext of a made up emergency), or he caves, or eventually the GOP pledge to override his veto (but probably only if it goes on for a few months).

It is a milestone. I knew as soon as he was elected that the establishment would work night and day to prevent trump being inaugurated, and/or seek to have him thrown out of office.
The other concern that i had was that he would become bored or frustrated with the limitations of office.