U2 rehashes The Joshua Tree tour - innovative and relevant or Smokey just makes another comeback?

Will they be doing a Tax Avoidance Symposium after the Gig.....

At least that would be interesting.......

ionsniffer said:
didn't mind bono until I saw him at the epp meeting in Dublin with merkel and the other fine gael scum. he basically congratulated Irish people for bailing out banks, taking it up the arse and saving europe.

Too young perhaps to remember the U2 photo ops with Garret the Good ...?.....
What the imagination can't conjure, reality delivers with a shrug
F

The real genius in U2 is The Edge...if they ever do call it a day this will become self evident in short order with the solo efforts...
What the imagination can't conjure, reality delivers with a shrug
F

BumFluff said:
Bone head is a bought and sold tax dodging propagandist for globalist agenda and a complete self important ars3hole.

I wouldn't p*ss on him if he was on fire, let alone help fund his tax exile mansion by buying a ticket to his concert.

You can easily download this album for free without enabling this twat.

Despite my disgust at Bono, I actually do like this album, even though his lyrics are just sickening lip service.
For instance, he sings, in a lovely melodic song "running to stand still" about some unfortunate heroin addict who "sees seven towers but only one way out". Well she certainly won't see a way out through your tax money being used for public drug rehabilitation services, public housing or job creation will she bono? :roll:

Ah heeere leevvve it ooout.....Bono knows what he's talkin' about... he's from Fingerless east.... the warzone......
What the imagination can't conjure, reality delivers with a shrug

He is a great axe man. No doubt about that. His guitars are so distinctive and instantly recognisable like Johnny Marr.
"Criticising the EU in Ireland in the 2010's is like criticising the Catholic Church in the 1950s. You run the risk of being lynched by brainwashed fanatics." - Volatire

Any journalist out there want to look where the money is going ?

I live close enough to Croker to be able to have heard, albeit muffled versions of 'Bad', 'With or Without You' and 'Bullet the Blue Sky' last night.

I did notice a lot of the older hardcore U2 fans from the '80s around town yesterday. Plenty of Italians, Spanish, English and Americans wearing the 'Joshua Tree 2017' tee-shirts.
"Criticising the EU in Ireland in the 2010's is like criticising the Catholic Church in the 1950s. You run the risk of being lynched by brainwashed fanatics." - Volatire
N

I'm going along to one of the Paris shows this week. but not expecting much. They're atarting to look decidedly old, stuffed into their teenage leather outfits, the Edges silly hat and gold miner facial hair was tiresome two decades ago, Bono's monotonous shades, Mullins perma scowl, Claytons 'i won the lotto smile' as he still atruggles to play bass for goodness sale. All the same old same old. Nothing decent musically sonce whenever. Woudl rather it was a reboot of the Achtung Baby tour with the Trabants etc and more of that album. We'll see. Maybe i'll be pleasantly surprised
Unionists in Ireland...going...going...going....gone
T

I was just watching some youtube clips of U2 in the early '80s circa 'Under a blood red sky' and it quite honestly pisses all over anything they've done since.

Those live performances of '11 o'clock tick tock', 'Electric Co' and 'Gloria' were a million times better than the sludge they are pumping out now.
"Criticising the EU in Ireland in the 2010's is like criticising the Catholic Church in the 1950s. You run the risk of being lynched by brainwashed fanatics." - Volatire 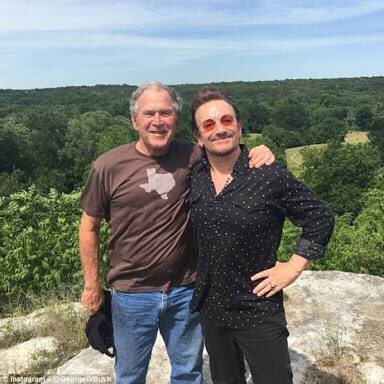 How the fnck could he do that. Smirking with the twat that destroyed the entire middle east, along with his neo con pals.

This twat caused the refugee crisis, which Bono is no doubt preaching about at the moment.

That's why people detest Bono. Globalist shill.
"Criticising the EU in Ireland in the 2010's is like criticising the Catholic Church in the 1950s. You run the risk of being lynched by brainwashed fanatics." - Volatire
B

Except for Bono's excellent tax work I have always thought that he should have been called Bobo the Clown.......

I wrote this piece last week - I needed to vent...

We came to this great Great Britain and we thank you for looking after the Irish. So proclaimed Bono to the audience who travelled to Twickenham to hear U2s 30[SUP]th[/SUP] anniversary tour of songs from the Joshua Tree album. Upon reading this, my thoughts moved quickly from a sense of sadness at the implicit admission from a once great band that their best work is long behind them to a feeling of there not being sufficient swear words with which to describe Bono. Who the hell is this man to presume to speak for the Irish people (in Ireland or here in Britain)?!?!

Where to start with that comment? Perhaps first the monstrous egotism involved. We thank you for looking after the Irish. Who is we? U2? Ireland? It sounds very much as if Bono is speaking on behalf of the whole country  like de Valera, it seems that he need only look into his own heart to know what the Irish people think and want. It takes a special sort of self-regard to appoint oneself spokesperson for an entire nation.

But what really rattled my cage was the looking after part. There are any number of levels on which that is not only wrong, but insulting. What in Gods Name does he think that we, the Irish in Britain, are or do? Its as if we are the equivalent of dogs which have been put in a kennel for a while  Thanks for looking after them!  or children in the care of a nanny. He talks as if he is conducting a conversation over our head with someone else. How on Earth did he get the idea that he has the right to speak for us, or about us, in that manner?

Particularly annoying is the presumption that we needed looking after. True, there have been periods over the decades since Independence where emigration was an epidemic, and economic refuge was needed elsewhere in the world. But it was always a two-way relationship  we contributed much needed economic aid to Britain in the form of labour and services, and went on to become entrepreneurs and employers of British people too. Whether in the 19[SUP]th[/SUP] Century or the 1950s and 60s, the Irish built Britains infrastructure at a time when Britain had desperate shortages of labour.

There have been criticisms of U2 and Bono over the years, some justified, some unfair. The inverted snobbery among some critics (particularly indie NME types) over the years has often been unedifying to read  U2 produced some great records which sounded nothing like anything else around at the time, and seem to have been found guilty merely of becoming popular. Bono himself has been called a hypocrite for his and U2s tax arrangements, but I heavily suspect that Bono is very serious about following the biblical injunction to give alms secretly, and he deserves credit for his tireless charity work and campaigning, however annoying he might be perceived to be by some.

Nor is this a dig at Britain itself. Many, my own parents included, were glad of the opportunities that were open to them and the fairness with which they were treated upon arrival in Britain in the late 50s. Of course, there were the Irish jokes and the racial stereotypes, the No blacks, no dogs, no Irish signs, and the bouts of hostility/injustice during the years of the Troubles. But, generally, we got on with living and working in Britain quite happily (and often without the desire to return to Ireland). But we did this as people who were entitled to do it, and who did not need looking after. We paid taxes like everyone else, and we helped a nation rebuild itself, care for itself, and administer itself.

But the implicit presumption behind Bonos expression of gratitude at Twickenham is a profoundly insulting one, which does a massive disservice to a people whose experience he cannot understand, let alone give sufficient respect. It would be bad enough coming from someone whose experience was rooted in the story of the Irish in Britain, like Shane MacGowan or John Lydon  though I suspect that they would never think in such a way, let alone say it. Coming from a middle-class Dubliner living in a Dalkey mansion, it jars in a way which inspires extreme inventiveness in the use of expletives.

In short, stick to the singing please Mr. Hewson, and let others speak for themselves.
The smart, ballsy guys are buying up property right now

midlander12 said:
Saw the show in Cork in 1987- wasn't madly into them then and even less so now. Clunky, 1980's stadium bombast. They have been very quiet of late so I suppose a few weeks' work was deemed appropriate. They haven't done anything original in about 20 years so I suppose repeating a 1980's tour doesn't seem too out of place.
Click to expand...

Was at that show myself.
Loved it - still have the ticket stubs. Converted me to a fan (of the Edge to be honest).

Not my favourite live performance though. That goes to the Pogues at Christmas in the Ulster Hall a few years later.
F

Saw them in 1987 in Croke park......from what i can remember through the haze of time and about 14 litres of Bulmers is a geezer up on the roof of one of the stands and swinging out of the flagpole at the end kept diverting the crowds attention and píssing the stumpy egotist off....:lol:
What the imagination can't conjure, reality delivers with a shrug
You must log in or register to reply here.
Share:
Facebook Twitter Email