Who are the Alt Right?

There's been a lot of discussion of the Alt-Right or Alternative Right in the build-up to the 2016 Presidential Election in the US and especially in the aftermath of Donald Trump's victory, with many people referring to their role in getting Trump elected.

A lot of people are referring to the appointment of Stephen Bannon of Breitbart as an 'alt-right' appointment to Trump's cabinet.

But who are they? People seem to have widely differing opinions of who makes up the alt right and what they actually stand for.

Some people view people like Milo Yiannopoulis, Paul Joseph Watson & Stefan Molyneux as alt right but many others say they are not really alt right because although they espouse anti-immigration & anti-muslim viewpoints, they are not hardcore enough on things like Jewish power in America or white identity politics.

Broadly speaking, the alt right have classic 'far right' views and are anti-immigration, anti-feminist, anti-Islam and anti-multiculturalism but generally they can be divided into people who have those positions and people who go further and are fiercely critical of Jewish power in America and espouse white identity or white nationalist beliefs.

The term 'Alt Right' was coined by Richard Spencer, an American white identitarian or white nationalist, who openly calls for a white ethnostate in the United States and he considers people like Yiannopoulis to be fakes, who really have safe pro-establishment views.

On this more hardcore side, you would have Spencer, Kevin MacDonald ( an academic who has written several books which fiercely criticise Jewish power in the US ), Jared Taylor, Greg Johnson ( of Counter Currents, a new right online journal ) and a host of others who produce podcasts which have a reach of 100's of 1000's, if not millions ( Red Ice Radio, The Daily Shoah etc ).
"Criticising the EU in Ireland in the 2010's is like criticising the Catholic Church in the 1950s. You run the risk of being lynched by brainwashed fanatics." - Volatire

An Actual Conservative's Guide To The Alt-Right: 8 Things You Need To Know | Daily Wire

Trust no one it seems, every one has an agenda .. or do they

An alt alt-right explanation from The economist for balance, if thats possible

The Economist explains
What is the Alt-Right?
Last edited: Nov 14, 2016

I only heard the term back at the start of the year , a guy who goes by the name of Ramzpaul, a US unabashed white nationalist who wouldn't be a fan of the Jews but at the same time thinks they are entitled to their own homeland , on the other side Milo would see them as fellow travellers and possibly use the term on and off.
The divider I'd see would be how you see the population of a country and its makeup, if your preferred population makeup for your country is 90%+ natives then you are leaning to Alt-right on the other hand if you are not too fussed about numbers but just don't want high levels of migration or migration that would compromise the culture of the country then you aren't
its turned into a bit of a meme this year, maybe with Trump being elected it wont have the same rallying call about it because it will keep most regular conservatives happy for now.
"So you think humans should run their societies like lobsters?"........ Cathy Newman C4 News
K

Keyboard warriors
"The great appear great because we are on our knees: Let us rise." James Larkin.

The opposite of Alt-Wrong.
The difference between genius and stupidity is that genius has its limits.”—Albert Einstein.

It seems easier to say what the AltiRight is not, anti-establishment is a good umbrella term, mostly people who are fed up with the status quo of western politics without any particular philosophy other than being fed up with the present day politics and thinking....hence attracting together an unlikely cohort of anti-semitists, racists and mostly just people who want to see something different emerge from the establishment politics that has become the norm.
R

The name sounds like a keyboard shortcut, which is appropriate because the Alt-Right is largely an online phenomenon.
Click to expand...

The name sounds like a keyboard shortcut, which is appropriate because the Alt-Right is largely an online phenomenon.
Click to expand...

Essentially it started out as American post-grads attempting to do their own version of the French Nouvelle Droite (I am actually a big fan of Alain De Benoist- but he has come a long way from what he was in the 1970s). Now it has come to mean people like the loathsome Milo. Arktos Press which is "Alt-Right" do put out a lot of interesting translations of mainland European stuff which otherwise would not make it into English so I am grateful to them for that.

I guess they are conservatives who reject certain views of mainstream conservatism. They are more sceptical of free trade and in that sense so hark back to the protectionist Republicans from President's McKinley to Hoover. On the Jews I don't think they are anti Semitic so much as concerned at the disproportionate power concentrated in certain Jews that are prominent in finance and the media and how it can skew politics sometimes. In a sense that are harking back to the old idea of "unhyphenated Americanism" i.e that you should only be American and not be hung up on sectional interest.

On immigration they reject the more liberal views of Paul Ryan. and the business community for amnesty for cheap labour. Steve Bannon has been quoted as accusing Ryan of pushing his 'Catholic social justice crusade in my face' or something - a possible reference to this. Of course Bannon is also Catholic.
Last edited: Nov 16, 2016
"The birds sang, the proles sang, the Party did not sing" - Winston Smith (1984)

there is no such thing as traditional left and right anymore.

So who is right and left in meaningful way, unless you think being left wing means something to do with dysfunctional sexuality.
R

I know this is the 3rd time I have repeated this link here - but so far it is the best WHAT IS ALT-RIGHT article I have seen .. my opinion of course

.. striking a bold blow for freedom of speech and against political correctness. To the extent that the Alt-Right dabbles in economics it is highly protectionist. It sees misogyny as a bold rebellion against the prevailing culture. Its favourite symbol is a cartoon frog called Pepe ( Below )
Click to expand... 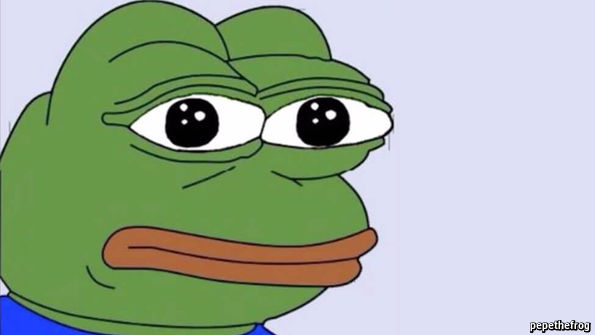 Dame_Enda said:
I guess they are conservatives who reject certain views of mainstream conservatism.
Click to expand...

They hate people like Paul Ryan, Jeb Bush, Ted Cruz, John Kasich and Marco Rubio, who they see as 'cucking' to the Democrats on things like immigration.
"Criticising the EU in Ireland in the 2010's is like criticising the Catholic Church in the 1950s. You run the risk of being lynched by brainwashed fanatics." - Volatire

I guess we're gonna find out...

There may be plenty of wolves in sheeps clothing prowling around the 'political' world now... who have been enabled and emboldened and given the opportunity to win power by increasingly weak and pathetic 'career politicians' who lack conviction and who blow whatever way the wind is blowing at any time in order to see that they're re-elected.

That this increasingly visionless and cynical breed of politician is failing now should surprise nobody.

People know when they're being patronised and spun to and lied to.
M

No, he doesn't. It's not a surprise, you or anyone would be confused, he lies about everything. Leaving things to the states was a poor answer as well. Once again, he has no policies. But he has said it should go up and wages are also too high. Regardless, we know that he pays some of his workers f all anyway.
I hate money making men - Alexander Hamilton
G

I really dont like how the term "Social Justice" has being hijacked. In many ways Cardinal Manning was a Social Justice warrior given the massive support he gave to the just demands of the English working class who came out on mass for his funeral but due to the fact that he was also an ardent Ultra-Montanist with a lot of extremely "Reactionary" views he would have nothing in common with what are called SWJs today. Truth to told I dont think Mercurial et al give a damn about the white contemporary victims of "Food Bank Britian".
M

Hmmmm... it wasn't long ago people were dismissing Trump as a joke too...
T

Exactly, Cubas immigration policy is tougher than anything proposed by Trump or Farage.
When was the last time you heard any criticism of it?

I don't think Watson or Yiannopoulis would be considered 'alt-right figureheads' for the simple reason that they are not hardcore enough on things like Jewish power in the US.

That's really what separates the likes of Yiannopoulis from say Richard Spencer or the Daily Shoah, whose constant theme is Jewish domination of the media and Washington.
"Criticising the EU in Ireland in the 2010's is like criticising the Catholic Church in the 1950s. You run the risk of being lynched by brainwashed fanatics." - Volatire
You must log in or register to reply here.
Share:
Facebook Twitter Email