The man who "saved" democracy in Turkey continues to give us new gems. The man who thinks women in the workplace is an abomination has taken a page it seems out of his new friend Putin.

In a wide-ranging speech Erdogan commented Turkey cannot draw a boundary on its heart nor should since it had so many brothers (it's never sisters is it but then this is a Trump like misogynistic) across so many countries that they should also be regarded as a special interest for Turkey. The Greeks have reacted with anger since in Thrace there are many Turkish background persons and claim is being made to that area. Better put claim is being made to Greek citizens because a century or more ago they were Turkish. Can someone look up the Reich blood laws to determine precedent?
It has been suggested this is more to do with Mosul and Northern Syria than it is to do with any claim to either Cyprus parts of Greece Azerbaijan parts of the Crimea and so forth however is it not just an indication that turkey has now become an imperial power, jingoistic, fascist imperial power. A Country that focuses on creating a new social order where women are very much second-class citizens, where Kurds are not even regarded as real citizens and presumably where Kurdish women are even lower than the dog.

Some clapped because Erdogan the fascist beat Gulenists. Now Gulen did say that since a beating would benefit some women it was okay in principle so he saved it from one religious fascist nut but that was to forget Erdogan has deeply fascistic tendencies. A serious case of missing the obvious.

Turkey is also trying to actively control citizens resident in Austria and Germany. In what context should that be now regarded?

Finally the Greeks are asking shouldn't Europe do something? But Europe regards Greece as a greater enemy than Turkey and happily works with the first fascist regime in Europe in decades.

This is grim stuff.

This clarifies the fascists intent in Mosul.

In Mosul a history lies for us. If the gentlemen desire so, let them read the Misak-i Milli (National Oath) and understand what the place means to us, Erdogan declared.

The Turkish president referred to an Ottoman Parliament-sealed, 1920 pact that designates Kirkuk and Mosul as parts of Turkey.
Click to expand...

The Ottomans had this map in mind. 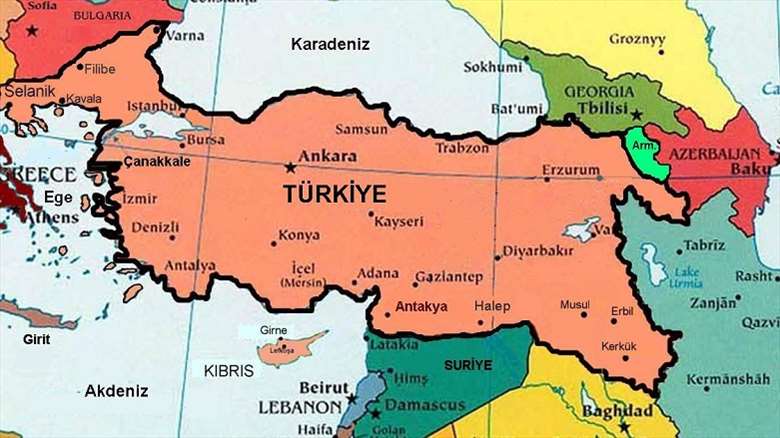 The article is from a Kurdish site and as we all know Kurds are not trustworthy and should be imprisoned in their towns and shot freely in the streets.

Erdogan recently complained of islands assigned to Greece in the Treaty of Lausanne.

They could certainly try this but they know if they attack.an EU member then EU membership is out the window.

Dame_Enda said:
Erdogan recently complained of islands assigned to Greece in the Treaty of Lausanne.

They could certainly try this but they know if they attack.an EU member then EU membership is out the window.

Greece has one of the largest fleets in the EU and one of the largest in manpower armed forces in NATO. Not as large as Turkey obviously but such a war might exact a toll on Turkey that might be unpopular back home
Click to expand...

The problem with fascist megalomaniacs is they have a habit of doing things that are unexpected. Turkey won't invade Greece but don't be surprised if Turkey starts to push itself more and more about.

They can shoot people in the streets, ban Democratic parties, launch court cases all over Europe to preserve glorious leaders good name, send troops into 2 countries and try to give women the true dignity of a homelife free from paid work and despite all this Europe will still refuse to call them Fascist.

Turkey can see that like Russia it's better to play the ethno-jingoistic card than launch a conventional war. There won't be no fighting but Turkey continues to show itself as irredentist and fascistic.

Presumably this will not affect their prospect of EU membership.
R

not gonna happen as would require the Turks to go to war with the KRG (with an army of 150,000 to 200,000) and, as it currently stands, the Iraqi central government